Ford Transit Custom PHEV To Be Tested In Cologne, Germany 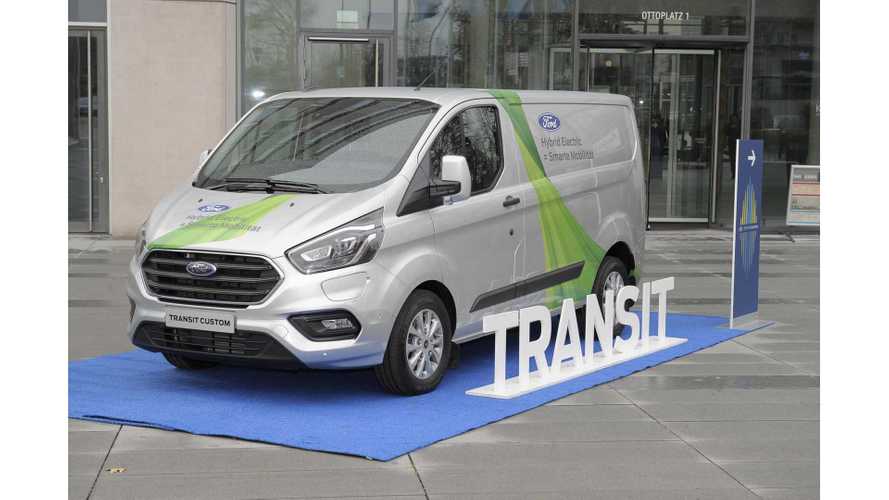 More tests announced ahead of the market launch

Ford expands the trial project with its Transit Custom Plug-in Hybrid delivery van to the third city in Europe - after London and Valencia in Spain. From Spring 2019, 12 units will enter service in Cologne, Germany for 12 months.

Ford promises that production and sales of the series-hybrid with plug-in capability will begin next year, but it will be a European-only car, so don't expect the Transit Custom PHEV in the U.S.

"From spring 2019, Ford, supported by the City of Cologne, will operate a fleet of 10 Ford Transit Custom PHEVs with regional companies in the city to investigate the extent to which PHEVs can help to achieve urban air quality goals. Funded by Ford, the trial will initially run for 12 months, in cooperation with municipal fleets serving the public sector, complementing testing in London and Valencia, in Spain, with larger fleets and small-to-medium fleets respectively."

Two Transit Custom PHEV commercial vehicles each will be operated by the following regional companies:

Gunnar Herrmann, chairman of the management board, Ford of Germany said:

“Ford recognises Cologne as a city of strategic importance regarding future mobility. Together with the City of Cologne, we will start to investigate how we might in future look forward to urban areas that offer better air quality and can also be more productive,”.

Henriette Reker, Mayor of the City of Cologne said:

“For the rapidly growing city of Cologne, emission-free mobility is a crucial issue for the future. Every research project that works towards this will benefit our city. I am glad that Ford, as an automotive manufacturer, with its European headquarters in Cologne, will undertake this trial,”.

The brief specifications of the Ford Transit Custom PHEV: