The Sway Electric Scooter Looks Stylish, But Is It For Real?

The three-wheeled electric scooter is a great idea, but we're still waiting to see it.

Electric scooters seem to be multiplying like rabbits these days. One unique entry is the Sway, a scooter that has three wheels but still leans in the turns like a Yamaha Niken. The only problem is that Sway Motorsports has been promising production for years, and we're still waiting for it to happen. 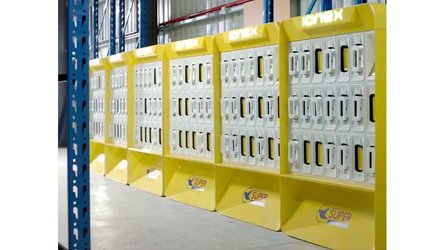 Fans of Shark Tank may remember a funky little tilting scooter that appeared in 2015 during season six. That was the Sway. It's designed to be simple enough for anyone to ride, even non-motorcyclists. Sway Motorsports claims that it's so simple that founder Joe Wilcox’s mother, who is five-foot-two and was 60 years old at the time, had no trouble riding an early prototype.

Sway: A Revolution in Transportation from Sway Motorsports on Vimeo.

Very little about the Sway has changed since that prototype was unveiled way back in 2012. It features a 4.2-kilowatt-hour lithium-ion battery, similar to what Tesla uses, powering a six-kilowatt electric motor. This can propel the Sway to a top speed of 55 miles per hour and a maximum range of about 40 miles. It features a specially designed steering mechanism that allows the scooter to lean through the turns as though it had two wheels, like the Yamaha Niken. The design is actually quite similar to the Tilting Motor Works kit that can convert a Honda Goldwing or certain Harley-Davidsons into leaning three-wheelers.

One of the Sway's huge benefits is that in California, where Sway Motorsports is located, you can legally ride a Sway with nothing more than a standard driver's license. You can also legally lane split in California. This could be huge for city dwellers, who could take advantage of the Sway's maneuverability in traffic without having to get a motorcycle license. It's a win-win situation.

The Shark Tank exposure resulted in more than $1 million worth of pre-orders for the scooter. Sway Motorsports entered into a partnership with Govecs, a major German electric scooter manufacturer, to put the Sway into production. Unfortunately, three years later, we're still waiting for it. Heavy had reported that the first Sways were expected to be ready in July 2016. Then Powersports Finance reported last year that production was expected to begin in the fall, and a faster prototype would be available in 2018. Here we are in late 2018, and we haven't seen either of these.

The Sway still looks like a great idea, but the competitors are catching up. Yamaha's TriTown concept, which is quite similar to the Sway, will be on display at CES in January. A healthy established company like Yamaha has a much better chance of putting such a scooter into production than a small company that has been struggling to find funding for years. You can still order a Sway for $9,999 on its website, but as great as it looks, I wouldn't be so quick to plunk my money down until I see some production bikes.