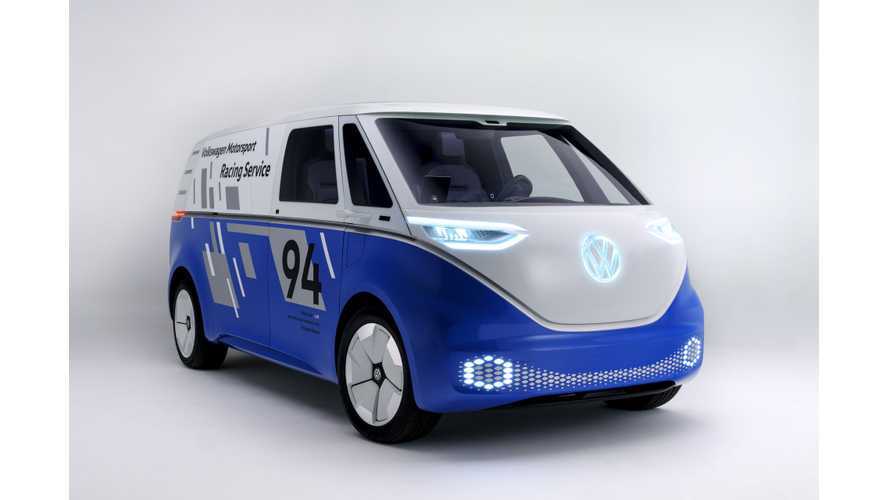 Volkswagen will make some buzz in Los Angeles

At this year's Los Angeles Auto Show, Volkswagen will present the latest version of the I.D. BUZZ concept model - the I.D. BUZZ CARGO - which debuted at the IAA in September.

For the Los Angeles Auto Show, the concept has been reimagined as a support vehicle and got special livery that refers to the Pikes Peak record holder, I.D. R., with colors and a design that includes the course map for the prestigious race.

The passenger version of the Volkswagen I.D. BUZZ will enter production in the Hanover factory, probably around 2022, and it's expected that the commercial CARGO version is also part of the plan.

From a technical standpoint, the BUZZ CARGO concept has the same specification as at the IAA with battery packs from 48 kWh to 111 kWh and range of up to 340 miles (550 km).

Besides electrification, Volkswagen hints at an interior tailored for commercial use and autonomous driving capabilities.

Los Angeles (November 27, 2018)– The original Volkswagen Transporter is the most recognizable light commercial vehicle of all time. With the auto show premiere of the I.D. BUZZ CARGO concept, Volkswagen Commercial Vehicles is showing how an electrically powered and completely redeveloped Transporter might change the world of LCVs. Based on the Modular Electric Drive Kit (MEB), and a sibling to the I.D. BUZZ concept first shown in Detroit last year, the CARGO could be launched as a production vehicle in Europe as early as 2022.

Such a vehicle has the potential to revolutionize parcel delivery. Between 2005 and 2015, the global number of parcels delivered grew by 128 percent, due in large part to the revolution in e-commerce and home delivery. In the U.S., delivery trucks account for 7 percent of urban traffic and 17 percent of congestion costs due to wasted hours and fuel. The use of autonomous electric delivery vans has the potential to lower the CO2 footprint of these vehicles, lower operating costs to delivery services (and thus, potentially, to customers), and make the whole process more efficient.

As the newest member of the I.D. Family—a new generation of fully-connected electric vehicles—CARGO features long range driving capability. Depending on the size of the battery pack, CARGO can achieve ranges between about 200 and 340 miles on the WLTP cycle. If the vehicle covers fairly normal distances in the city on a daily and weekly basis, a lithium-ion battery with an energy capacity of 48 kWh is recommended. If greater range is needed, the energy capacity can be increased up to 111 kWh.

Volkswagen Commercial Vehicles has combined the battery in the I.D. BUZZ CARGO with a 201-horsepower (150 kW) electric motor, a single-speed transmission, and rear-wheel drive. However, an all-wheel drive system, like the one implemented in the I.D. BUZZ, is possible in the future simply by adding a motor at the front of the vehicle. The flow of high-voltage energy between the motor and the battery is controlled by the power electronics. Direct current (DC) stored in the battery is converted into alternating current (AC). A DC/DC converter supplies the on-board electronics with 12 volts. The vehicle’s top speed is electronically limited to 99 mph.

The 111kWh battery in the CARGO can be charged to 80 percent capacity in 30 minutes with a 150 kW DC fastcharger. The battery system has also been prepared for inductive charging. To charge, the van is positioned over a charging platewhile parking. As soon as the control unit of the charging plate in the pavement has set up a communications channel with the vehicle, contactless energy can be transferred through an electromagnetic field generated between two coils (one in the floor of the parking space and one in the vehicle).

Exterior The design of the I.D. BUZZ CARGO is defined by the interplay of familiar elements of the original Transporter’s DNAwith futuristic elements. The front end, in particular, with a characteristic "V" and a typically friendly "face" clearly reflects the old car, yetis a completely new interpretation. Instead of the round headlights of the original model, the CARGO has interactive LED systems which not only illuminate the road, but also communicate interactively with pedestrians. Another defining feature of the design is the short front overhang. The transporter is 198.7 in long, 77.8 in wide and 77.3 in tall, with a wheelbase of 129.9 inches. Since the rear overhang was extended by about 4 inches, the cargo version of the I.D. BUZZ is significantly longer than the vehicle shown in Detroit. The CARGO concept has a payload (maximum load) of 1,760 pounds.

Outside, the CARGO concept is differentiated from the I.D. BUZZ by a new solar roof, wide-opening rear doors and a new rear bumper. The solar roof features a photovoltaic system that generates so much energy that it is able to extend the range of the vehicle by up to 9.3 miles a day. With a view towards optimizing cargo space via a shelving system, there is no sliding door on the driver’s side, typical of LCVs. The front doors and sliding door open electrically. Unlocking the vehicle from the outside is activated via a sensor. The CARGO recognizes authorized persons via a digital key which is sent to the van from a smartphone. Instead of the 22-inch wheels of the Detroit concept vehicle, new 20-inch wheels are used with 235/55 tires.

The I.D. BUZZ CARGO shown in Los Angeles has been reimagined from the version first shown in Hannover earlier this year. As a support vehicle for the I.D. R Pikes Peak record holder, its livery mimics the R’s colors and the design includes the course map for the prestigious race.

Interior Like all members of the I.D. Family, the I.D. BUZZ CARGO is characterized by an exceptionally large interior, thanks to the packaging advantages brought by the MEB architecture. The battery is integrated into the vehicle floor, lowering the vehicle's center of gravity and improving handling significantly. The transporter's axles have been shifted outwards, because no space is required for a combustion engine at the front, and the compact electric motor is mounted on the rear axle, creating up to 7 cubic feet of extra space in the front of the vehicle.

The interior has been tailored for commercial use, down to the smallest detail. Instead of two single seats in the front, the concept vehicle is equipped with a driver's seat and a double bench-seat on the front passenger side. The middle seat can be folded down to open up a workspacewhere the driver can use an integrated laptop. In the automated "I.D. Pilot" mode,this can even be done on the move. The driver activates the autonomous mode by simply pushing on the steering wheel for a few seconds, which then retracts into the instrument panel. Then the driver's seat can be turned 15 degrees to the right, enabling the on-board computer to be operated from the ideal ergonomic position.

In driving mode, the main controls are located on the steering wheel and key information is projected in 3D via an Augmented Reality (AR) head-up display. Rear view mirrors become a thing of the past, with cameras projecting images onto small screens in the cab, and other information such as infotainment and climate control functions is displayed on a tablet.

The cargo compartment begins behind the first seat row and a bulkhead. In cooperation with the German equipment specialist Sortimo, a shelving system with sensors has been developed for the cargo area. This shelving system is connected to the vehicle via a customer-specific function control unit and a CAN interface. The data is transferred by WLAN to tablets in the cargo space and cockpit. By means of a mobile radio network, the functional control unit might communicate with a company’s job or order-management system, theoretically making it possible to track all articles on the shelves. This enables precise online management of the type and quantity of freight and equipment in this futuristic Transporter. Further data is provided by the ConnectedVan fleet management system. In its LA role as a support vehicle for the I.D. R Pikes Peak, the vehicle is outfitted with a workbench and parts for the I.D. R.

During autonomous driving it is possible to accept, schedule, and process orders from the driver's workplace. Thanks to the connected shelving system's data it is also possible to perform order-related stock checks while on the move. It is also possible to perform optimum, flexible route planning,taking customer appointments into account. Thanks to the Safety Check function, any unsecured tools or missing parts are indicated before the start of the journey. Any components taken out get automatically registered, working times recorded and invoices issued. An 8.6-square-footlight integrated in the roof makes access to the items even easier and quicker.

Driving up to loading ramps is made easier by the wide-opening, symmetrical rear doors. When they are opened, a workbench can be folded out. Even high-performance work tools can be supplied with power there from 230V electrical sockets (16A) via the battery. This has been implemented to ensure that the I.D.BUZZ CARGO is not just a means of transportation, but also a standalone mobile workshop.