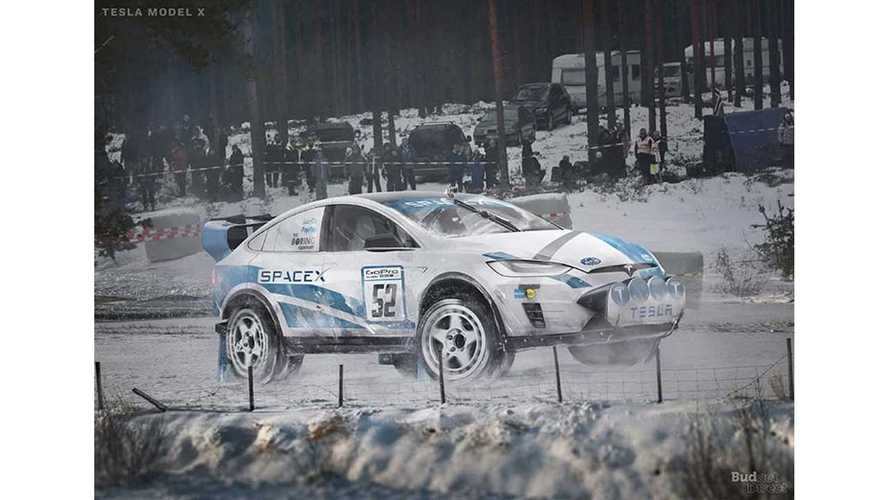 What would a Tesla Model X look like as a rally car?

The Tesla Model X all-electric crossover probably doesn't come to mind when you think about vehicles with solid potential for use as rally cars. However, let's be reminded that the whole point of the rally car scene is to take an "average" or "normal" car and ready it for competition. Okay, the Tesla Model X is not average or normal, but hopefully you get the point. Anyhow, Australian-based insurance company Budget Direct recently published an article showing renderings of what it might look like if hypercars were to race on a dirt track.

The folks at autoevolution just covered an interesting concept in which they talked about how it might look if automakers like smart and Range Rover joined hands or Lamborghini partnered with BMW. So, it comes as no surprise that the site jumped on the chance to cover Budget Direct's hypercar/rally car tie up. Among a short list of ICE cars and semi-electrified models, the Tesla Model X joins the club as the only battery-electric entrant, as well as the only crossover/SUV to be rendered and featured.

Hypercars aren't cheap, and there are few owners that would likely throw them on a dirt track to get the snot beat out of them. However, it's pretty interesting to imagine such a situation. Enter the Tesla Model X warped into a hypercar variant with means to race the rally circuit. Electric cars are surely superb candidates for hypercars and rally cars. C'mon, we're talking about instant torque, Ludicrous acceleration, and standard all-wheel drive here. Not to mention the electric crossover's smart air suspension. Any Tesla would do just fine here, really!

For a whole new take on rallying, the Tesla Model X would really shake up the old order. Being all-electric it would have frightening acceleration though unfortunately without any of the engine noise that makes the sport so thrilling. Not to be deterred however, the Model X already has all wheel drive as well as Tesla’s unique, Smart Air Suspension while its performance edition doubles up the rear motor’s power to 503 bhp. It sounds like they were planning for a foray into rallying all along and with Elon Musk still at the helm who would be surprised?