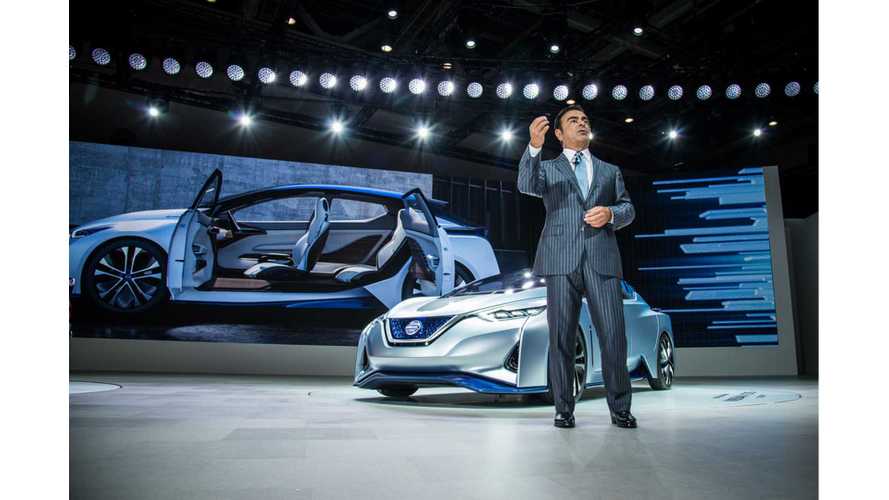 Due to the issues surrounding Carlos Ghosn, Nissan will delay the launch.

The higher-performance, longer-range LEAF was expected soon, but Nissan now says it will delay the launch until this Ghosn issue is cleared up.

***UPDATE: The Wall Street Journal is reporting that Nissan had planned to debut the 60-kWh LEAF at the LA Auto Show too, but that reveal was canceled.

According to the latest news, the longer-range Nissan LEAF (with a 60 kWh battery), which was expected to be launched a year after the introduction of the base second-generation LEAF with 40 kWh battery, is postponed.

The reasons behind the postponement are the allegations and arrest of Carlos Ghosn, who led Nissan (for years as CEO and most recently as Chairman of the Board). Ghosn is seen as the father of Nissan LEAF, which was introduced in 2010. This postponement could be an in-your-face move to shun Ghosn one last time.

"While the automakers have stressed that operations and business are proceeding as normal, Nissan has postponed the launch of its high-performance Leaf electric car “to ensure that this important product unveiling could receive the coverage it merits”, a Nissan spokesman said."

"Nissan called off the launch of a high-performance Leaf electric car, cancelling Nov. 28 events in Yokohama and Amsterdam."

It's totally understandable that for Nissan the situation right now is not comfortable to launch a new LEAF version, but we sure hope this postponement doesn't last long.

The highly anticipated 60-kWh LEAF would surely revive electric car sales for the brand here in the U.S. where it's struggle of late due to increasingly stiff competition.