In the plug-in hybrid space there are really only 2 models that most EV advocates can agree can be driven as electric vehicles first and hybrids second. One is the founder of category, the Chevy Volt. The other is the Honda Clarity PHEV, a relative newcomer from Honda.

Following the vehicle's introduction in 2017, the Clarity has been making its mark on the plug-in space. Since then it has received a very positive reception from owners. David Colman of The Auto Channel recently had the opportunity to take the Clarity out on the road. Like many others, he was very impressed with Honda's first dedicated electric vehicle variants.

More About The Honda Clarity PHEV 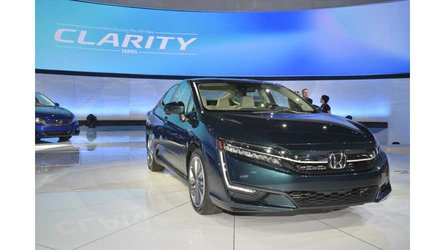 On the handling of the Clarity, David writes "Given its hefty curb weight (4,045lbs.), this full size sedan comports itself with dignity and grace. I wouldn't go so far as to call it nimble, but it certainly merits the term sure-footed."

The brakes are a step up from what he expects from a hybrid. "It doesn't have squishy, unpredictable brakes. (...) And its handling is neither treacherous nor slovenly." Sport mode was also a nice feature for quicker throttle response and stiffer steering feedback.

Once the electric range is depleted, fuel efficiency is quite good at 42 MPG. On the downside, the Clarity has a small 7 gallon fuel tank. So there will be frequent gas station trips for those driving in hybrid mode regularly.

In general David feels the exterior styling is a bit much. The simplified interior cabin is "restful and well laid out" although the infotainment system can be difficult to use. Specifically the lack of a dedicated volume control or station changing knobs causes a distraction when driving. Thankfully, steering wheel volume controls help alleviate this some.

He refers to the steering wheel paddle as controlling the operation of the CVT transmission. This leads to a complaint that "You're never quite sure what simulated "gear" you're in because the video display on the instrument panel does not record gear number, but rather displays a series of tiny chevrons which increase as you shift up and decrease as you paddle shift down." His confusion comes from the fact that he is not in fact shifting gears. The paddles are instead adjusting the regenerative braking levels.

Considering all of this, the reviewer is likely fairly new to not only the Honda Clarity but electric driving in general. So the fact that he enjoyed his time with the Clarity is great to see. The more new drivers have positive experiences with plug-ins, the faster they will catch on.