Tesla Model 3 Versus A 37-Pound Boulder 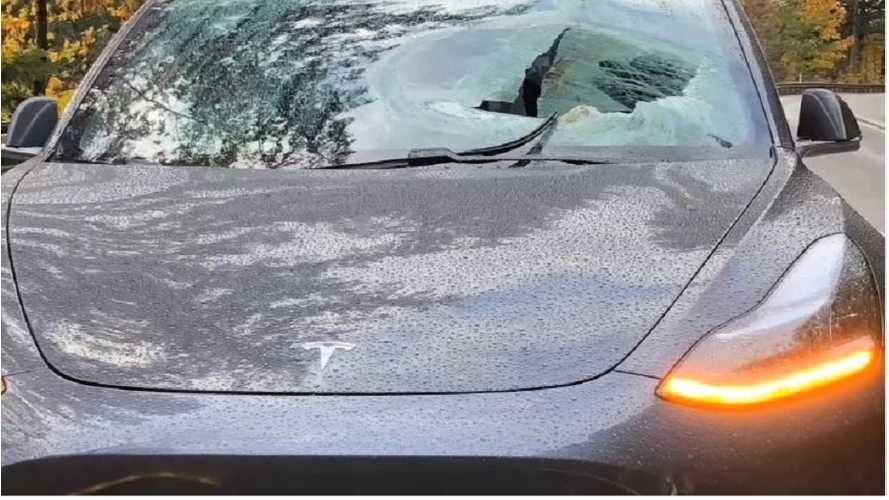 How about a huge rock landing in your passenger seat with no warning?

This Tesla Model 3 owner didn't expect to have an instant driving companion, but we're glad he's okay. Jade Insko was driving his Model 3 on SR 14 near Cape Horn, Washington when a 37-pound boulder fell through his windshield and parked itself in his passenger seat. He told Fox 12:

All of a sudden, my car just seemed to explode as this 37-pound rock flew through the windshield, smashed into the dashboard, and bounced directly into the passenger seat.

Insko had no warning that the large rock was heading toward his brand-new Tesla, and after it happened, he wasn't really sure what was going on. He came to a sudden stop and tried to assess the situation. Insko continued:

I just pulled forward slowly with my hazards on, I couldn't see anything, I had glass in my face and eyes and a giant hole in my windshield.

He realized quickly that many rocks must have fallen since there was other damage to the front of his Model 3. The force of the largest boulder pushed the steering wheel toward him, but aside from cuts from the glass, he was not severely injured. If the rock had landed on him, this would be a very different story.

Insko points out that this situation is very unsafe for drivers and it's not the first time he's seen rocks hurling down toward the roadway. He shared:

In some areas like Cape Horn, there are rock falls often, there are rocks on the road as you drive through there, and I feel like the department of transportation needs to do more for more public safety in those areas.

According to the Washington Department of Transportation, this mountainous area is closely watched. Drivers are reminded to call emergency services if they witness falling rocks. However, Insko thinks further precautions are immediately necessary. He concludes:

I feel like it's only a matter of time before there's a real tragedy.

He's kept the large boulder as a reminder of what could have been.