Additionally, the I-PACE won in the Green Car of the Year category too.

According to Professional Driver, the I-PACE generated unprecedented demand for test drives and at the same time received a torrent of positive feedback.

"The Jaguar I-Pace is the “game changer” that could allow private hire and chauffeur operators to go all-electric, said Mark Bursa, editor of Professional Driver Magazine: “The I-Pace generated unprecedented levels of enthusiasm at or two-day judging event in September, and we knew we had our likely winner even before we’d added up the scores.”“We’ve never had a car in such demand for test drives, and we’ve never had quite such a torrent of positive feedback as we had for our 2018 Professional Driver Car of the Year. As one judge commented: ‘This could be the game-changer we’ve been waiting for.’.”

“With a range of more than 250 miles on a single charge thanks to a 90kW lithium ion battery pack, and the ability to rapid charge from zero to 80% in 45 minutes, the I-Pace is a practical proposition for chauffeurs. The lack of a conventional engine gives I-Pace a short bonnet and a long cabin. This has maximised the cabin size, giving rear seat legroom and headroom comparable to an executive saloon, as well as providing a 656 litre boot that is capable of swallowing several suitcases.”

Mark Bursa continued: “The I-Pace is already securing orders from e-chauffeur companies. WeKnow Group is planning to run a major fleet out of Heathrow, while other big operators, including Parker Car Service, have ordered the cars. The I-Pace is fully ULEZ-compliant, and has the daily range to do just about any job without needing to recharge. This makes it a worthy winner of the 2018 Professional Driver Car of the Year Award.”

Well, if the I-PACE is really so good, it should receive a lot of additional orders from companies on top of individual customers. 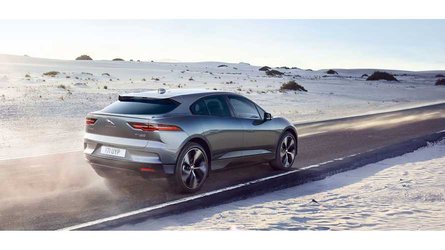 The Professional Driver Car of the Year category winners are as follows:

Private Hire Car of the Year

More about the Professional Driver Car of the Year Awards:

"Professional Driver magazine, launched in 2009, is the monthly publication for the UK private hire, chauffeur and taxi industry.

The Professional Driver Car of the Year Awards are now in their 10th year. Every shortlisted car is delivered to the venue for evaluation by more than 100 judges, comprising invited heads of leading chauffeur and private hire firms, experienced chauffeurs, as well as carefully chosen motoring editors and journalists.

This year, more than 60 vehicles were available for the judges to test on the day, giving them a rare chance to evaluate competing products back-to-back, in real-world conditions.

Cars are tested on a circular road route, taking in urban roads and motorway-standard dual-carriageways. Then the cars are given a full walk-round - judges and examine systems such as the sat-nav as well as the vital boot space – we even provide test luggage for comparison purposes.

The judges are asked to drive as many of the cars as possible, and have to ride in the back of the cars – so they experience the cars from the customer’s point of view. Then each judge completes a two-page questionnaire, allocating points out of 10 for various features of the cars.

At the end of the day, the scores are totalled for each car and divided by the number of test drives to which that car was subjected, giving an overall average score. Finally, the Professional Driver team factors in whole-life running costs, using data provided by Fleet Audits.

“This thorough and comprehensive process means we’re as certain as we can be that we’ve got a fair result - and we know how and why the results have been achieved,” said Professional Driver editor Mark Bursa."