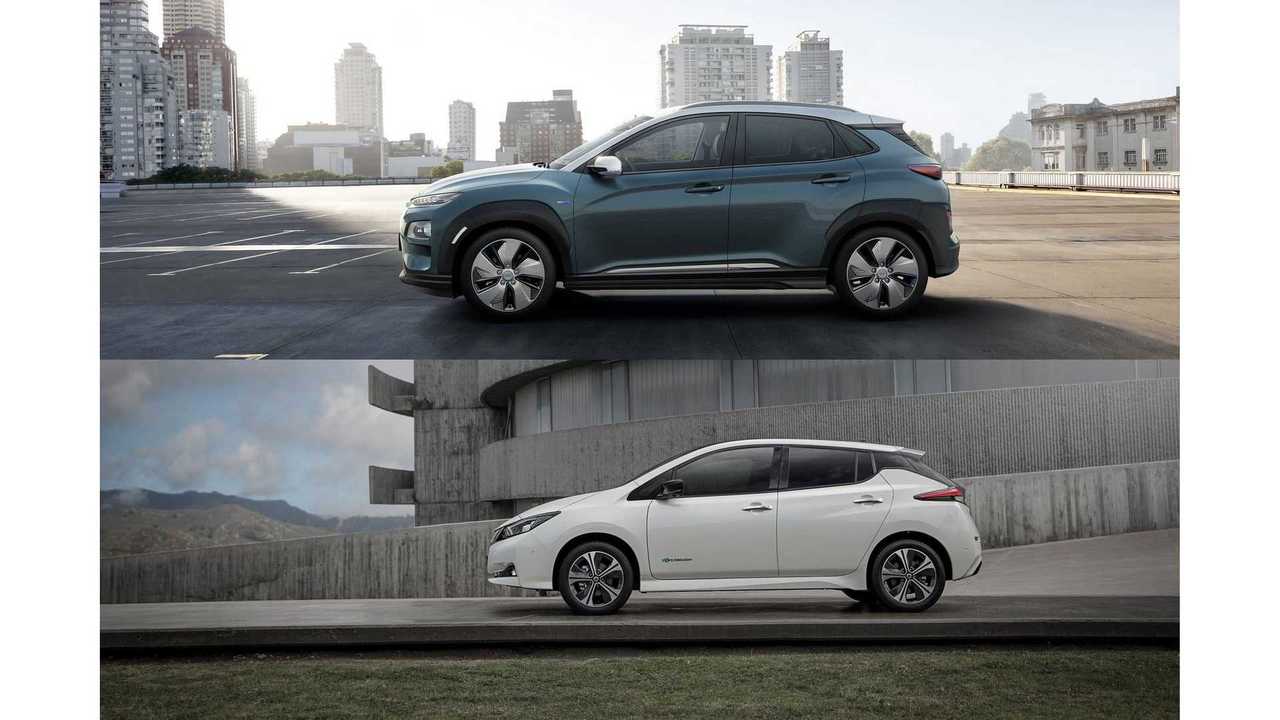 First mover advantage. It's something Nissan should be enjoying in the economical electric vehicle space, considering it launched the LEAF at the tail end of 2010. Just last year Nissan introduced the 2nd generation of that pioneering hatchback. Now that other companies are launching similarly-priced battery-powered vehicles, the Japanese automaker should have a technical advantage, right? Well, let's see how it stacks up against this exceptional newcomer, the Hyundai Kona Electric.

More looks at the LEAF and Kona Electric

This all-electric version of the Hyundai Kona is already stalking the streets of the UK, so British publication Auto Express had the opportunity to do a little comparison. Their findings should have some relevance here in the U.S., even though they are putting up the version of the new crossover with the smaller 39 kWh battery. Besides having similar pack sizes — the LEAF sports a 40 kWh battery — their prices in the UK are separated by only 520 British pounds ($665). To be precise, the MSRP of the base Kona Electric is 27,370 pounds ($34,987) while the LEAF MSRP is slightly higher at 27,890 pounds ($35,652).

Starting with performance, it seems the LEAF has an edge. Auto Express puts the Nissan's output at 148 British horsepower (the automaker pegs it at 147 hp), while the Hyundai bows at 134 bhp. This power gap expresses itself in 0-to-60 acceleration, with the LEAF easily winning this contest at a spritely 7.8 seconds and its competitor lagging at 8.6 seconds.

When it comes to electric vehicle performance, it isn't always about the speed, but rather the efficiency, since that impacts the all-important range. Here, the Hyundai enjoys a considerable advantage. It gets 4.5 miles per kWh while the LEAF is less efficient at only 3.6 miles per kWh. Their respective ranges amplify this divide. Expressed using the WLTP European standard, the LEAF is rated at 168 miles, while the Kona Electric impresses at 194 miles.

Of course, cars generally are all about driving and livability. The reviewers weren't all that impressed with either of the two — it did enjoy the e-pedal system of the LEAF — when it came to on-road dynamics saying,

In truth, neither model is that enjoyable to drive, but the Kona has just enough agility and steering response so that it darts keenly into corners as long as you’re conservative with your speed.

Interestingly, though the Kona Electric is a crossover, it still didn't have the storage space in the back like the LEAF. And while that may move the needle toward the electric pioneer, its infotainment system was said to be inferior to that in the Korean car.

Taking all the factors into account, Auto Express gives the edge to the Hyundai Kona Electric. It found the crossover to have a slightly better quality interior with more passenger roominess. The extra range sealed the deal.

These are all elements that can be tweaked, so it will be interesting how the big battery versions of these match up after the 60 kWh version of the LEAF is released next year.