Hyundai Creta Electric To Be Automaker's Next EV In India? 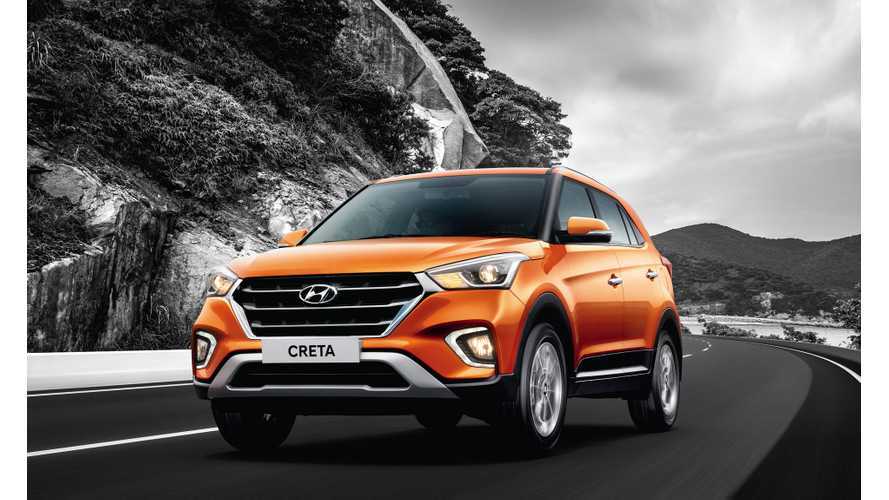 India is set to get its first Hyundai all-electric vehicle in 2019 when it begins selling the Kona Electric there, but it may not be the only battery-powered crossover headed to the subcontinent. The Financial Express muses aloud that it may also be bringing an electric version of the Creta to the country. Known as the ix25 in other territories, this compact crossover is based on the same platform as the current Kia Soul and its name is an homage to the Greek island of Crete and a play on the word "creative."

More about electric vehicles in India

Suzuki To Test Its First Electric Cars In India

We should stress that the report does not definitively say what the company's next electric vehicle will be, though it does seem likely to be a sub-compact crossover, so the Creta is a good guess. The publication cites a quote from Y. K. Koo, Managing Director and CEO of Hyundai Motor India who, in an interview said that while the second product might be a sedan, there is a higher chance it will be an SUV.

If it does happen to be the Creta, we wonder if they are considering borrowing the electric drivetrain found within the first generation of Soul EV from its corporate cousin Kia. That would certainly help keep the cost down in a price-sensitive market, though since the battery in that original car doesn't have a liquid-cooled temperature management system (TMS), we're not convinced that would be an appropriate product for the country, regions of which get pretty hot. Given the imprecise language used in the interview, we would not be surprised to see the Ioniq make an Indian debut instead.

India made headlines earlier this year when it announced it would be going EV-only by 2030, and that decision is seen as the motivating factor for the Korean automaker's electric moves there. Though the deadline is less than a dozen years away, Hyundai isn't trying to grab significant market share just yet. According to Koo, the Kona Electric, which will enter the country as a "completely-knock-down" (CKD) product to avoid certain taxes, will not be a volume product. We expect the same can be said of this second mystery vehicle.