BMW iX3 Captured From All Angles In New Spy Shots 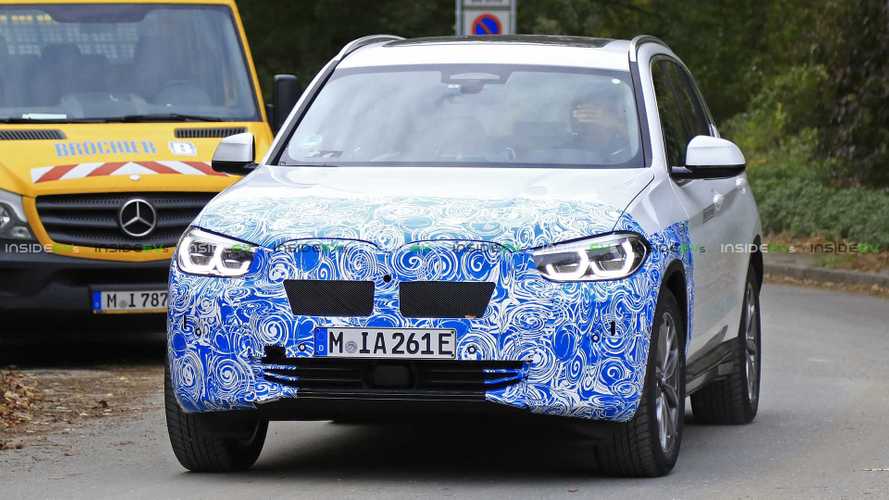 Take a walkaround of the upcoming BMW iX3 in these latest spy shots.

These latest spy shots of the upcoming pure electric BMW iX3, that once-gaping grilled is now more properly closed off as it should be. As our spy photographer tells us, this time we see that development is moving forward as this prototype has the correct bumper and grille under what’s now just a bit of camo, but most notable in this newest batch of photos is that we get to see the iX3 from basically every angle imaginable.

If you glance back at our last round of spy shots of the iX3 from March, you’ll immediately see the difference. These changes lead us to believe that the electric SUV seen here is now close to production ready.

As a refresher, the iX3 concept showcased in Beijing had a battery pack with a capacity of 70 kWh providing enough juice for more than 400 kilometers (249 miles) on the WLTP cycle. Based on BMW’s fifth-generation electric drive system, the zero-emissions crossover had an output rated at 270 horsepower (200 kilowatts) and took advantage of fast-charging capabilities to fully “fill up” the battery in only half an hour.

Those figures still haven’t been fully confirmed though for the production version of this electric SUV, though we do know that it will be produced in China and exported from there. It’s U.S.-bound, though an exact date is still unknown at this time. However, we expect it to arrive sometime in 2020, which means it will surely be late to the now-growing electric crossover/SUV party.

Grab some more views of the BMW iX3 in the gallery below: