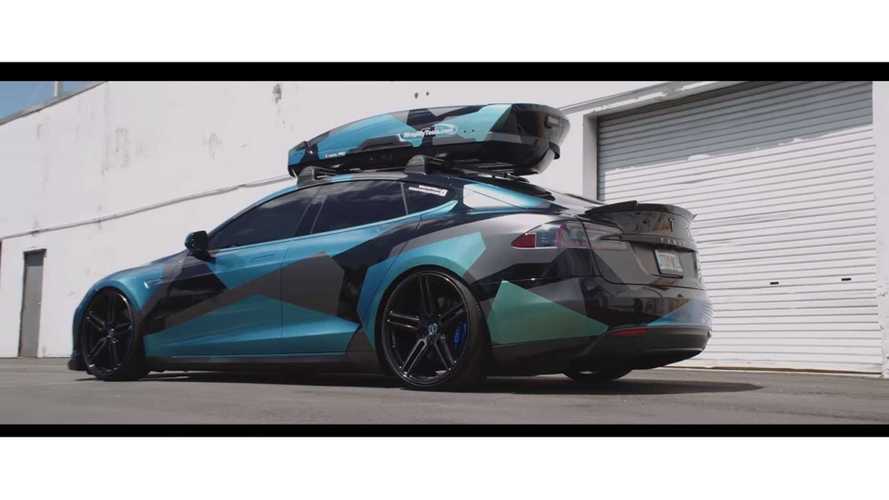 THE KING OF TESLA WRAPS, MODS, AND RESTYLING TALKS SHOP

When customers love a product, they want to personalize it, and boy, is that ever true of Tesla’s vehicles. If you’re one of those Tesla owners who just has to give your baby a truly distinctive look, sooner or later you’ll find your way to Mike “Mojo” Mogilewski’s Signature Custom Wraps & Coatings in Fort Lauderdale, Florida.

Check Out This Funky Tesla Model X In Finland!

Mike’s evolution into the king of Tesla customization began six years ago, when a friend showed up at his shop with a Model S, one of the first ones in Florida. “We decided to wrap it in matte metallic blue, and we threw some custom Vossen wheels on,” says Mike. “The Vossen Wheel Company did a video on it to showcase their new wheels, and it went viral. My sticker was on the windshield and on the back window, and one thing led to another.”

Before long, Tesla opened a dealership in nearby Dania Beach, and demand from Florida Tesla owners quickly snowballed. “It just kind of grew bigger and bigger, and I got the reputation of the guy to go to to work on Teslas,” says Mike. “I concentrated on just Teslas and nothing else. Right now I am basically at 99.9% Teslas. I used to just do vinyl wraps, then I got certified as a ceramic pro shop. Then, once I got that, I started doing a lot of coatings on cars. A lot of people were asking for paint protection film, so I got certified as an Xpel shop for window tint and paint protection film.”

Above: A fleet of Tesla Model 3 cars getting worked on inside the shop (Source: Signature Custom Wraps & Coatings)

Nowadays people are sending Mike Teslas from all over the country - he estimates that he has worked on well over a thousand. Concentrating on one brand makes things simpler. “Teslas are Teslas - there are only three models, and everybody in my shop knows the ins and outs of a Model X, a Model S, and a Model 3. We know what we’ve got to do to wrap it or paint-protect it or polish it before we ceramic coat it. They’re very simple cars to work on. Once you master a product, people trust you and come to you for everything from window tinting to redoing interiors to powder coating and custom calipers.”

A big part of the enjoyment of the job comes from meeting so many Tesla owners - Mojo has found them to be a very eclectic bunch. “I like to know what they do, where they come from, what got them into Teslas, what they were driving before - why are some people giving up their $150,000 Mercedes and buying a Tesla?”

Tesla buyers come from all age groups. “You see the younger crowd, who have been saving up, and they just want an electric car.” Of course, this is Florida, so seniors are also well represented. “I just got done wrapping a guy’s car who was 78 years old. He lives in a community over in Naples. It’s amazing to see such a large range of age groups in the Tesla community, and it’s not just people with money. These people are into technology, the future, sustainable stuff, changing the world, things like that.”

“It’s fun to work with everybody because it’s such a great community. I’ve been part of the Porsche community, and the BMW community, but the Tesla community is very personal, especially in the blogs and the forums. The Porsche guys all wear their fighter pilot sunglasses, and they’ve got a look to them. I don’t see a look to Tesla clients because they’re all over the place - they come from technology worlds or they come from stock worlds or they’re putting stuff into technology that they don’t know. How much money did people put up for a signature Tesla without even seeing it? At least 25 grand, and it was just a sketch of an electric car. That blows my mind that people would just put that money up and be like, ‘Hey, keep our fingers crossed that this guy comes up with something.’”

How much does it cost to totally trick out a Tesla? “I had a chrome Model S out of Kentucky,” says Mike. “We did custom wheels, calipers, a Rolls Royce LED headliner kit and a 1,200-watt Italian sound system. We ended up doing a full custom bumper with a carbon fiber body kit. Wrapped it in chrome. He probably dropped $25,000, easily.”

“Two of my first Model 3 clients dropped $15,000 each on their cars, and that was wheels, calipers, wrap, lowered, chrome delete. On one we did a leather two-tone interior, and one guy did an all-white interior. We wrapped the dashes, the console. Ceramic coating, window tinting - what else did we do? Just crazy stuff, but these were two clients that came from Model Ss and Model Xs, and they were excited that they bought a $56,000 car, and not a $140,000 car, and they were actually able to play with the car and do whatever they wanted to do - it was kind of like their second car that they were able to do all the things you possibly could do to a car.”

Another client opted for a fully chrome exterior. “Everything chrome. If we could’ve chromed his wheels, he would’ve done it.”

Mike was honored when he was asked to create a gay pride Tesla for Pride Fest. “We wrapped it in multi-colored rainbow flag colors, and it was showcased in the Miami Pride Fest, and it went around to a bunch of other pride fests in Florida.”

A Mojo makeover can bring new life to an older Tesla. “Changing a signature color after so many years, going satin black, doing something different with the black chrome delete, changing up the wheels a little bit, adding things here and there - that’s the beauty of what we can do. We can take a car that people have had for years, and make it look brand-new. You deliver it to them all detailed and cleaned, and they can’t believe it’s still the same car.”

Mojo’s personal car has been called the world’s most eye-catching Tesla (his daughter puts it a little differently - she created a hashtag for #theObnoxiousTesla). “I’d gotten to that point that I could actually afford a Model S, and I didn’t want to just do a solid color change. I wanted to do something that would stand out, but nothing too crazy. I’ve already had a couple chrome cars. They’ve been done. So this car is something that isn’t too over the top, but it’s flashy enough to represent everything that we do on one car. You can see the original paint. It’s got a satin dark gray camouflage with a flip color gloss vinyl, so it’s got gloss paint, a satin wrap, and a color flip wrap. The chrome is deleted. It’s lowered. It’s got custom Vossen wheels. The calipers are painted blue just to show a different thing than red, like everyone does. It’s got completely blacked-out window tint, so you can’t see into it, which is entertaining at car shows because we sit in the car and we videotape people outside. I’ve got a luggage rack on top which I designed to go with the design of the car. I took out my headlights and I made the housing black instead of silver, which people don’t notice until they look at it, and they’re like, ‘What’s wrong with your car?’ I was able to showcase everything that we can do, which is fun. The best part is that next month, I can take it all off and start all over again, and have a completely different car, and now people will think there’s two of them out there.”

Mike has graduated from just doing the work himself to helping others with their own customization projects. “I started the web site wrapmytesla.com, and I started a Facebook page, because there’s so many people out there that are asking questions. They’re getting stuff from do-it-yourselfers, and there’s nothing wrong with that, but there’s some times when you’re trying to hook up a Black Vue camera and you’re looking for that right fuse...fuses change constantly with these cars, so if you’re not on top of that, you can do a lot of damage.”

People from all over the globe check in with Mike for advice. “We FaceTime people all the time around the world. There’s four more Teslas now that look identical to my Tesla.”

Mojo’s two kids are already involved in the business. “I have an 11-year-old daughter named Braeden, and she knows how to ceramic pro coat.” Nine-year-old Boston is “a little young, but he’s all about cars. It’s fun to see their future and what they’re going to be driving.”

A visit to Mojo’s shop is truly a glimpse of the future. On our latest visit, there were six Model 3s in various states of refurbishment. “Just to see this car evolve is mind-blowing.”