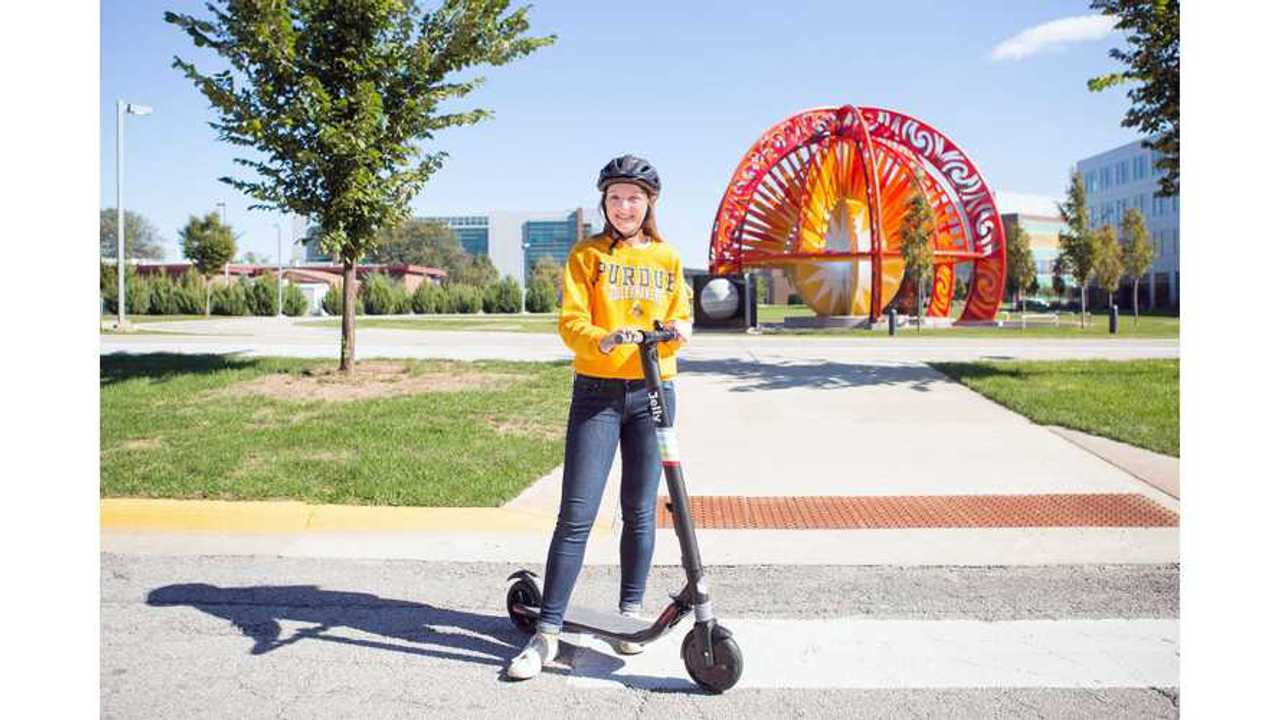 Is Ford Jelly of Lime?

Scooters are a big deal right now. Not the traditional Vespa sort (sadly), but the stand-up electric kind. The kind companies like Lime, Bird, and others have been carpet bombing American cities with over the past year.  The idea is, you can pick up one of the light mobility devices scattered about the town, hop on and drive it where you need to go, then leave it. Payment is handled via an app. They've become so popular it looks like the automotive giant Ford may be getting in on the two-wheel action. The automaker is apparently behind a new outfit called Jelly.

Hot or Not? The Miku Max e-Scooter Has Polarizing Look

Currently, the electric scooter startup seems to still be in stealth mode, but is involved in a research project on the campus of Purdue University in West Lafayette, Indiana.   According to a press release (reprinted in full below) from the school, the research intends to investigate "best practices for using e-scooters." Despite the devices being all over U.S. cities in a mad scramble for market share, the school says the study is "thought to be the first academic research to study how the oft-maligned e-scooters can best be incorporated into an urban environment." The University will see 40 of the Jelly scooters dropped off around the campus over the next few weeks.

Interestingly, the connection to Ford is not mentioned in that official press release. That relationship was uncovered by Reddit user Labtec901, who posted about the nascent effort, mentioning he had spotted the automaker's name on the rental agreement documents.

This wouldn't be Ford's first foray into the scooter world. Last year, it joined forces with  OjO Electric, which offers an upscale machine for $1,999. Though it looks like a pretty sweet ride for a scooter, it's probably fair to say that it hasn't had a huge impact on the world of mobility. Maybe this new, low-key approach will hit the proper notes to turn this effort into the kind of success that will make its competitors Jelly.

E-scooters at Purdue are sweet as jelly

WEST LAFAYETTE, Ind. — There's Jelly all over the place at Purdue.

Not the sticky spread, but a new e-scooter brand with a goofy name. And university officials are thrilled to see them. Seriously.

That's because Jelly isn’t just yet another e-scooter brand, but the name given to a a campus-wide research project on best practices for using e-scooters. This is thought to be the first academic research to study how the oft-maligned e-scooters can best be incorporated into an urban environment.

In the coming weeks, 40 scooters will be distributed across Purdue's campus to begin the initial four-week research project. The research project is being led by Darcy Bullock, Purdue’s Lyles Family Professor of Civil Engineering and director of the Joint Transportation Research Program, which is operated out of Purdue’s Discovery Park.

Aaron Madrid, alternative transportation coordinator at Purdue, said e-scooters, if used properly, have the potential to reduce traffic congestion, free up parking, and reduce the amount of climate- influencing pollutants into the air.

"E-scooters are a nice, green transportation choice that helps address the 'last mile' problem in high population density environments where many people use public transit or park on the outer edge," Madrid said. "The scooters are already safer than motor vehicles, but this research will help us learn more about how to make their use even safer."

Although the research results are intended to be used by civil engineering and city planners worldwide, Madrid said Purdue will be using the information for future decisions about whether to allow scooters on campus and how they should be used.

"Any city planner or engineer looking for information on e-scooters has probably only seen negative news stories about companies dumping scooters in a city and creating chaos, or a sales pitch from one of the companies," Madrid said. "To have actual data about what does and does not work well will be invaluable."

To begin using the scooters, riders must first download the Jelly app from the Apple App Store. For this initial four-week portion of the project, the app is available only for Apple iOS. Anyone on campus can use the scooters, including campus visitors.

The app will show where scooters are located on campus and offer information on how to begin riding.

Cassie McKee, a senior civil engineering major who is working on the research project, already rides a longboard on campus, but she said she's eager to see another transportation option.

"They're fun, and the students like them," she said. "But as a civil engineering student, I'm hoping people will use them in an appropriate way. For example, it really annoys me when I see someone leave one so that it blocks the ADA ramp on a sidewalk."

Madrid said that the same rules and laws apply for e-scooters as for bicycles. They are not to be ridden on sidewalks or inside buildings, but they can safely be ridden on local bike infrastructure or multi-use paths.

He adds that if the e-scooters are ridden on the road, riders must operate them just as if they were driving a vehicle.

"Whether you are on a bicycle or an e-scooter, if you are operating it in the road — which the law allows — you have to obey all traffic laws. That means you have to stop at stop signs, wait in line at red lights, and use front and rear lights when it's dark," Madrid says.

"I should also remind other users of the road that scooters and bicycles are 100 percent allowed to use the road. You should not swerve at them, pass them in an unsafe manner, or yell and harass them. If you think the bicyclist or scooter rider is violating the law, you should inform the police. Let them handle the issue."