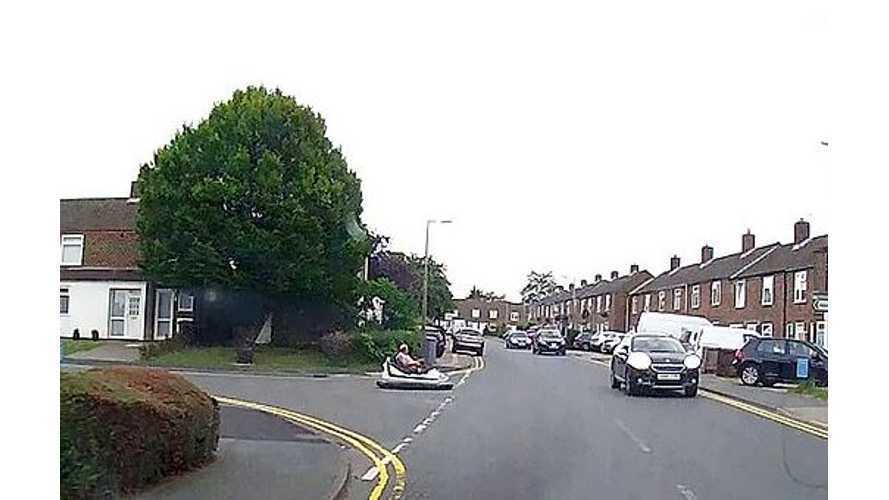 What’s the first vehicle you drove? A push car? A motorized sports car for kids? For a lot of people, their first experience behind the wheel would probably be inside a bumper car. You know, those electric one-seaters (sometimes two) that are often seen in theme parks or carnivals. Many will agree with me that it’s an important part of childhood, except maybe if you’ve had an accident while riding one when you were a child, but I digress.

With this in mind, what would you feel if you see a bumper car at an intersection?

That’s what happened in this video, which was submitted to Daily Mail UK by Ben Peters, who got the footage from the dash cam of an HD Property Services company vehicle. It was a sight to see, and Peters said he couldn’t believe what he saw that day.

Called dodgem in the U.K., the bumper car was seen nonchalantly waiting for the right time to turn at an intersection in a residential road. The driver was a middle-aged man wearing a vest. We’re not sure why he’s driving a bumper car or what his intentions are, but we’re pretty sure of one thing – he’s a fan of electric cars. Well, sort of.

Now, if you ask us if this is legal, we honestly don’t know. Maybe the guy has converted it into something that can be used on public roads, but we can only assume. Or maybe he had too much fun driving one in a theme park and just decided to take the bumper car home.

For the record, this isn’t the first that we’ve seen a bumper car outside its natural habitat. We’ve seen one before, and it was converted into an off-roader. The one from the U.K. is way cooler, though, as it looks less modified.