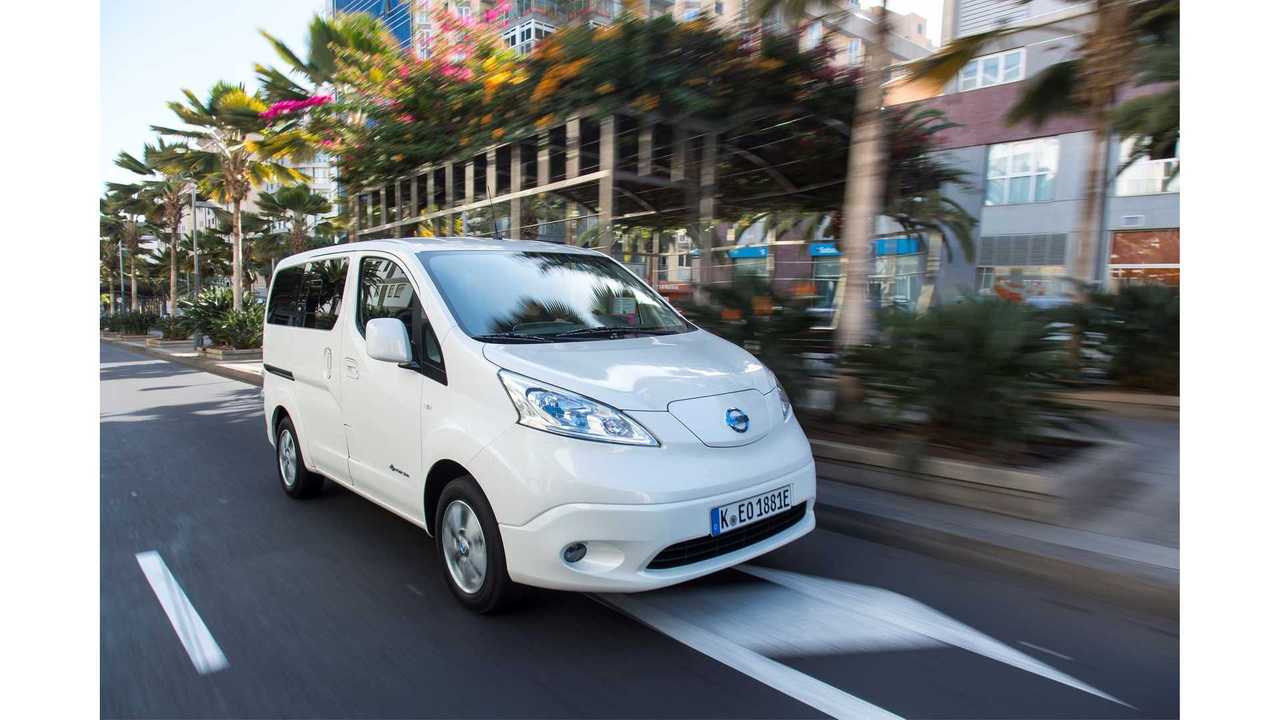 Demand for the Nissan e-NV200 doubled because of its new 40 kWh battery.

According to the latest press release, the Japanese electric van already attracted 7,000 orders this year in Europe, which is 128% more than a year ago at this point. More than 18,000 e-NV200s were sold since 2014.

"Among the recent orders, three taxi companies in The Netherlands have ordered a total of 50 new Nissan e-NV200 Evalia, the seven-seat passenger variant, to operate in the Rotterdam area.

Across Europe, businesses are operating against a backdrop of more stringent emission regulations and vehicle usage restrictions. For commercial and personal users the e-NV200 has proven to be a versatile and capable zero-emission solution. When taking into account both van and passenger-carrying versions, the e-NV200 was Europe’s best-selling electric model in 2016 and 2017."

Tremendous improvement of commercial EV sales seems to be related directly to the size of battery packs. The same we've noticed with the Renault Kangoo Z.E., which in eight months doubled to 4,955 (+119%) thanks to increasing battery capacity from 22 kWh to 33 kWh.

"The e-NV200 combines the best features of Nissan’s multi-award-winning NV200 van and the Nissan LEAF, the leading electric vehicle globally. The e-NV200 offers a fully electric powertrain, smart onboard technologies and multiple cabin configurations which can be tailored to meet both private and business needs.

Under the new Worldwide Harmonized Light Vehicle Test Procedure (WLTP) homologation procedure, the upgraded Nissan e-NV200’s advanced 40kWh battery delivers 200 km of range on the Combined Cycle and up to 301 km on the Urban City Cycle. This represents a 60% range improvement from a single charge over the previous generation.

The upgraded battery’s sophisticated design means the model has retained its excellent cargo capacity and payload, allowing customers to transport up to two Euro pallets or a load weighing up to 705 kg for the cargo van.

The Nissan e-NV200 also stands out in the marketplace with its unique bi-directional charging capability. This allows e-NV200 customers to use their vehicle batteries to store electricity, connect to and power their business, or even sell back excess electricity to help balance their local energy grid.

This Vehicle-to-Grid Technology (V2G) has been extensively piloted in Denmark and is now becoming a commercial reality. Innovate UK will shortly launch a program of 2,000 charger units for residential and commercial application."

“The new e-NV200’s blend of practicality, refinement and performance makes it the ideal tool for businesses to carry out their daily activities easily and sustainably, enabling them to maximize their operational efficiency and contribute to a cleaner future.”

He added: “The success of both variants truly demonstrates the appeal and quality of the e-NV200, showing how effectively electric vehicles can be used in a range of day-to-day conditions.

“With the van fleet size on Europe’s roads growing rapidly due to the ‘Amazon generation’ online ordering, it’s critical that this impact is mitigated by using smart, zero emission last mile delivery vans such as the Nissan e-NV200.”