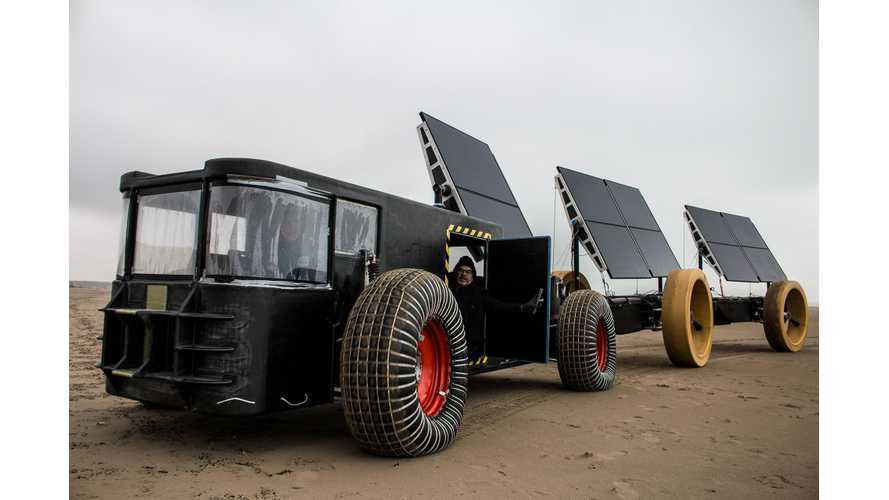 Adventurous expeditions have long been a part of the story about the transition to electric vehicle dominance, and now a new effort is about to extend that tradition. Meet the Polar Explorer (pictured above): a solar-powered four-wheel-drive vehicle made largely from recycled plastic that will attempt to reach the South Pole in about 10 weeks from now.

Venturi Develops Electric Vehicle For Use In Antarctica

The project arose from the simple act of disposing of some plastic packaging, something millions of us do every day. For the Dutch couple at the heart of the project — Liesbeth and Edwin — this was the proverbial straw that broke the camel's back and it triggered a series of events that ultimately led them to design, build, and test this glorious photon-fed beast.

For the past year or so, the "Clean 2 Antarctica" team has been posting videos of there progress and associated activities, and so you can probably find the answers to any engineering questions among the 68 (to date) visual missives on their YouTube channel. A perusal of its website does give a few interesting facts, though. For instance, its top speed is a mere 8 kph (4.97 miles per hour) while its weight is 1485 kg (3273.87 pounds).

The "tractor" portion of the vehicle features two solar panels, with each of the two trailers it pulls support four each, giving it a total of ten panels. Speaking of the trailers, they'll hold enough food for 47 days, though the targeted time for the expedition is 30 days. The entire train is 16 meters (52.49 feet) in length.

Despite all the preparations, the 2,400 km (1491 miles) journey should prove challenging. Though they have the advantage of being on the Southern continent when the sun never sets, they'll also face temperatures of -30 C (-22 F) regularly and likely experience much colder. Perhaps this is a good time to mention that the cabin of the vehicle isn't heated. (Yikes!)

We wish the couple and their entire team the best of luck with their unique adventure and hope to hear of their success in the coming months. For a little more insight into some of their preparations, check out the video below of their testing in Iceland.