Chevy Bolt EV Owners On Rural Texas Ranch: This Car Has Got Guts 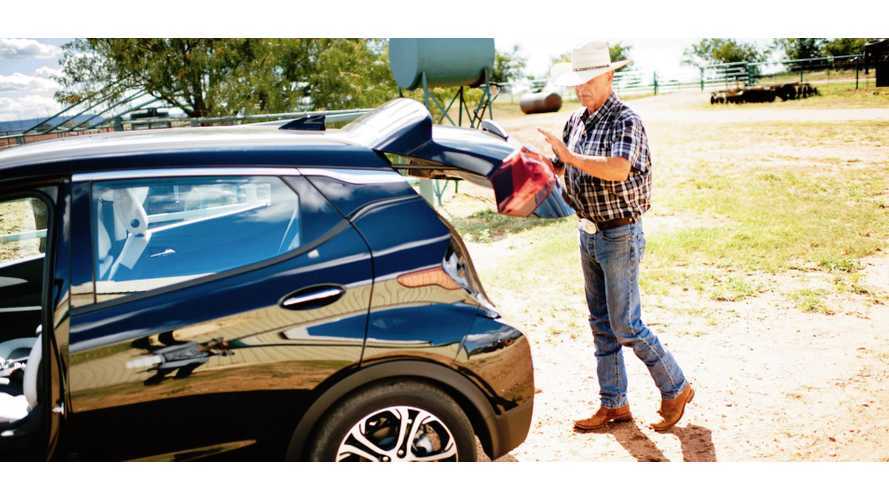 "I want to be a cowboy baby! Where my Chevy Bolt's charged by the sunshine shinin'."

Harry and Elizabeth Akers are proud new owners of the Chevy Bolt EV. The couple lives in rural Merkel, Texas about 20 miles from Abilene and 200 miles west of Dallas. They own 200 acres of land and 40 cattle on their property.

And now the Bolt is their primary mode of transportation for errands and hauling cargo. So far, Elizabeth Akers loves the range of the Bolt and its 56.6 cu ft of cargo space:

It’s about a 55-mile round trip to pick up feed for the cattle. We got the Bolt EV mainly for that reason—to go into town, run errands, and pick up what we need. We can go into town three times on a single charge, and it’s got more than enough room.

Hauling feed for the cattle or other items they need from town is a daily trip. So the cost of driving to and from town on gas was becoming a burden. Now with their new electric, their fuel comes from geothermal power and a solar panel installation. Hopefully they took advantage of the $2,500 Texas Plug-In rebate as well. The switch to a greener lifestyle is going to pay for itself in no time. According to Harry Akers:

The numbers just made sense when I looked at what we’d save with the Bolt EV. Bottom line is that we invest in things that reinvest in us, and we can put the money we’re saving back into things we want to do—like going on vacation and taking cruises.

The long range of the Bolt means a trip to Dallas/Fort Worth, Austin/San Antonio and Midland/Odessa are all more than do-able thanks to their centralized location. As charging infrastructure fills in, travel will become even easier. In fact, the Akers purchased their Bolt from Classic Chevrolet in Grapevine, TX near Dallas. The dealership is well known for Electric Avenue, a section dedicated solely to sale of hybrid and plug-in vehicles.

But it's not just the energy savings, range and cargo capacity the couple appreciates. The electric Chevy is also fun to drive. Of the vehicle's performance, Harry says "This car’s got all kind of guts to it."

Thanks to electrics like the Tesla Model 3 and Chevy Bolt, people all over are starting to see the value of electric cars.