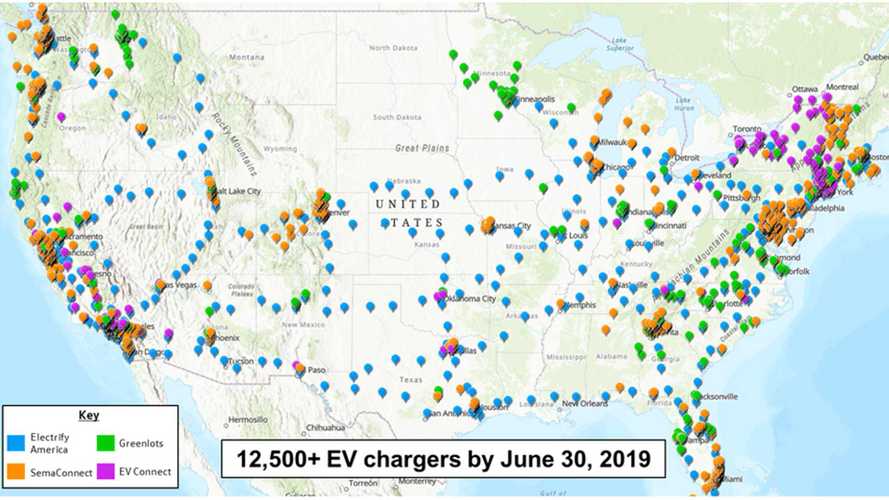 Throw away all your EV charging network cards. The new thing is “interoperability.”

Electrify America, the Volkswagen subsidiary, announced today that it signed a deal that effectively creates a combined network of 12,500 interoperable electric car charging stations. The term “interoperable” doesn’t exactly roll off your tongue, but it’s critical to transforming today’s patchwork of charging companies into a unified, refueling system that can be accessed by all EV drivers. The new interconnected network of chargers located at shopping centers, convenience stores, and workplaces will come online on June 30, 2019.

Based on the new agreement, future Electrify America customers will be able to charge their electric vehicles at stations operated by EV Connect, Greenlots, and SemaConnect. “EV customers are the big winners with these network interoperability agreements,” said Brendan, Jones, chief operating officer at Electrify America. “Drivers will now be able to roam between charging networks without the need for additional cards or accounts.” Electrify America, which is investing $2 billion in EV infrastructure and education in the next 10 years, wants EV drivers to have ready and easy access to refueling—just like today’s drivers of gas-powered cars enjoy.

“Greenlots has long been a leading advocate for interoperability and open standards for EV charging,” said Brett Hauser, CEO of Greenlots. “Agreements like this one bolster the national effort to deploy coast-to-coast charging infrastructure, making it easier for drivers to easily charge when and where they need.”

Electrify America plans to install more than 2,000 of its own chargers across the US by the end of 2019. The stations will use multiple cords accommodating various charging standards. Electrify America is also leading the effort to install 350-kW chargers capable of adding 200 or miles of range in about 15 minutes.

Fast and ubiquitous highway-based EV charging has mostly been the province of Teslas and its Superchargers. But Electrify America’s efforts, in concert with partner charging networks, promise to make long-distance EV road trips accessible to anybody that wants to make an electric pit stop and keep moving down the highway.