Audi's U.S. EV Plan: Another Indication That OEMs Aren't On Board 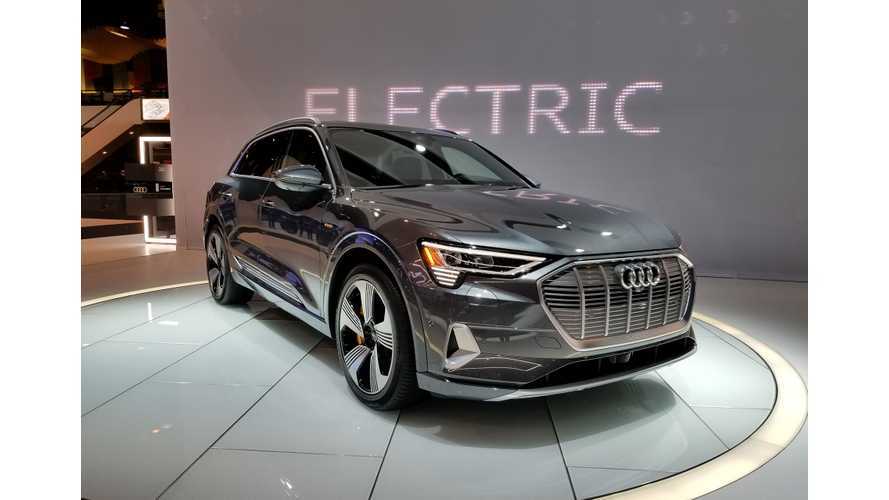 We journalists who cover the electric vehicle industry really want to believe automakers when they say they’re going to get serious about EVs, although we’ve been fooled so many times. Audi’s recent multi-million-dollar extravaganza for the launch of the e-tron convinced this correspondent (and quite a few others) that the company was serious about selling an EV in volume. Then we heard the news that Audi does not plan to ship any inventory vehicles to its US dealers.

Above: A look at the Audi e-tron (Image: InsideEVs)

Audi of America President Scott Keogh tried to put a positive spin on the decision, implying that saving the cost of maintaining an inventory was the only way Audi could make a profit on its first pure EV. “I think it would be a beautiful world if you can go to a dealer - and we’d like to find that beautiful world - with zero floorplan and proper, full gross on the car,” quoth he. “This would be a beautiful state; so let’s go see if we can find this dream state.”

The situation isn’t quite as dire as Keogh’s self-defeating sarcasm (and outraged responses from some of the EV press) makes it sound. Audi dealers will have demonstrator models on hand, and they will have the option of ordering e-trons for their own inventory (I expect some California dealers to do so, based on a conversation I had at the launch event with one of those dealers, who was enthusiastic about selling the e-tron).

Above: Audi's e-tron from behind (Image: InsideEVs)

However, the sales model Audi is proposing is that customers will place orders for the e-tron at dealerships or on Audi’s web site, held by refundable $1,000 deposits. Keogh said that wait times for delivery will depend on global demand, and could be months or even a year or more. All e-trons will be built at Audi’s assembly plant in Brussels.

Keogh told Automotive News that Audi’s dealer network will give the brand “a massive competitive advantage” over other EV-makers. At the launch event, one of the 300 dealers present told me that it would be interesting to see Tesla “fade away” as the e-tron came into its own. I responded to that comment with a wry smile, which has now evolved into a sad head-shake.

Above: Audi trolled Tesla's Elon Musk on a billboard that featured the e-tron concept in Berlin (Image: InsideEVs via Audi Deutschland / Facebook)

Yes, an established dealer network is a good thing, but dealers are famously focused on closing sales quickly - put your money on the table and drive it off the lot. They’re not likely to be thrilled about a put-down-a-deposit-and-wait sales model. And so far, most dealers haven’t proven to be enthusiastic EV-sellers. On the contrary, they’re often cited as one of the main bottlenecks standing in the way of wider EV adoption.

As other automakers have, Audi may be falling into the error of assuming that EVs can only be bought by a subset of the market called “EV buyers.” Of course such people exist, and a few of them will surely order an e-tron. But any automaker that wants to sell an EV in volume needs to reach people who haven’t considered an EV before, and it’s hard to see how an Audi dealer is going to convince many of them to put down a grand and wait a few months for an e-tron when they can drive a perfectly good gas or diesel-powered Audi home right now.

Above: Meanwhile, in Germany, Audi's CEO was recently detained by police in connection with the dieselgate probe* (Youtube: euronews)

On the other hand, car buyers’ habits are changing, and they may get used to ordering vehicles online more quickly than we think. Electrek reports that in Norway, Audi has already logged some 6,300 advance reservations for the e-tron (second only to the Tesla Model 3, which has an estimated 10,000 Norwegian orders on the books).

Written by: Charles Morris; Source: Automotive News; *Editor's Note: According to Bloomberg, Audi's dieselgate probe resulted in a fine of 800 million euros ($927 million) to settle its investigation by German prosecutors into the carmaker’s illegal emissions related to approximately 5 million diesel cars (with software "cheat" devices) sold in the U.S. and Europe.