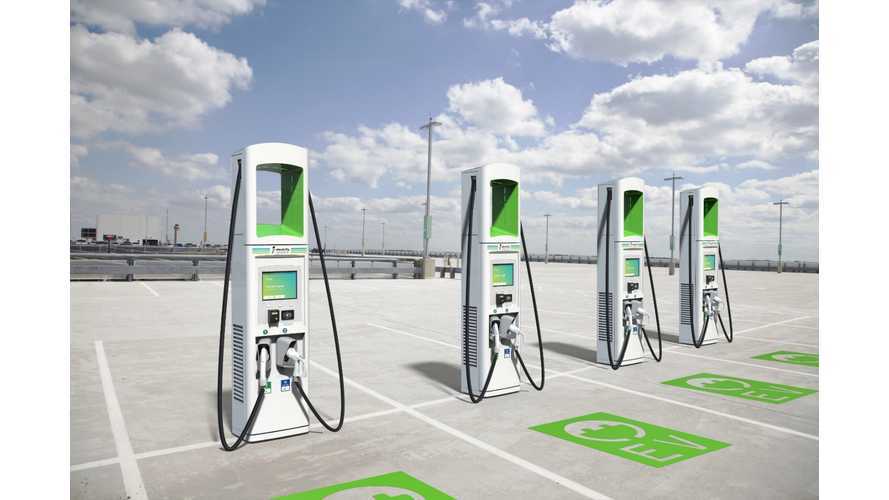 NJ Electric Vehicle Infrastructure bill (SCS-2252) was introduced back on March 5, 2018 by State Senators Bob Smith and Linda Greenstein but it hadn't gained much traction until recently. However, this past Monday, October 15th, it was finally voted on and approved by the Senate Environment and Energy Committee, and now heads to the State Senate Budget Committee.

How About Charging Your Electric Car From A Lamppost?

Electrify America: Over 20 Stations Installed, Including First In Oregon

The aggressive bill calls for the installation of at least 600 DC Fast Charge and Level 2 stations by 2021. The plan also calls for allocating $300 million for a new State EV rebate program, similar to California's CVRP rebate and Massachusetts MOR-EV rebate program.

The bill also establishes ambitious goals for increasing the number of plug-in electric vehicles on the road. By 2025, it hopes to have 330,000 zero-emission vehicles on the state’s roads, and two million by 2035. It also calls for 90 percent of all vehicles on New Jersey roads to be electric by 2040.

NJ Board of Public Uitilites President, Joseph L. Fiordaliso, was on hand Monday to speak of his support for the proposed EV infrastructure plan in New Jersey.

InsideEVs was on hand at the New Jersey State Annex building in Trenton on Monday to witness the press conference and participate in the EV Ride and Drive organized by NJ ChargeEVC and Reach Strategies.

New Jersey ChargEVC and Reach Strategies organized an EV test drive event outside the State Building where bill SCS-2252 was being voted on. Tesla, Chevrolet & Nissan brought their EVs for the event.

One of the bill's sponsors, Senator Bob Smith, was on site to talk about the urgent need for the State to transition to electric vehicles:

Given the speed at which the planet is warming, it is imperative we do all that we can do to protect the environment,’’ said Senator Smith.  He continued, “Increased usage of electric cars could greatly reduce the state’s greenhouse-gas emissions and improve air quality."

Some details from the proposed bill SCS-2252:

(1)   is reliably available for use by all PEV drivers in the State at all times;

(2)   is equitably accessible by all PEV drivers in the State;

(3)   provides convenient use by the public without unreasonable commercial or technical restrictions;

(4)   has locations that are highly visible along public roadways and through on-line resources;

(7)   all DCFC EVSE that are part of the Essential Public Charging Network is a typical PEV with a 60 kilowatt-hour battery can achieve an 80% state of charge in 20 minutes or less;

(8)   includes at least 100 DCFC locations Statewide along travel corridors by December 31, 2020, with geographic density of no more than 25 miles between locations, in addition to any locations or EVSE already in place as of January 1, 2018;

(9)   includes at least 200 DCFC locations Statewide at community locations by December 31, 2020, in addition to any locations or EVSE already in place as of January 1, 2018;

(12) includes electric infrastructure that is ready to support future high power requirements of at least 350 kilowatts of Direct Current per EVSE;

(13) provides for each DCFC EVSE to support at least two plug types, compliant with CHAdeMO and CCS standards as defined at the time of installation, and other additional standards as may be introduced based on technology improvements and approved for inclusion by the board;

(14) allows open access and use by the public, which shall not be restricted by membership, vehicle type, or other eligibility requirements; and