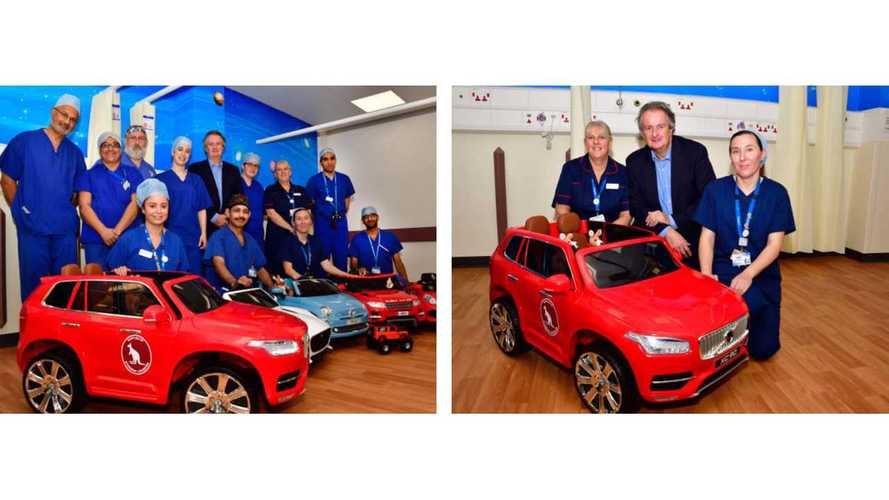 Hospital stays are not generally great experiences for us adults. For kids, who would much rather be playing at home or with their friends, it's even worse. To help the young ones deal with the experience, a car dealership in England has donated a number of electric cars to The Childrens Hospital at Leicester Royal Infirmary for them to drive to help take their mind off things and have a little fun, despite their circumstances. The cars in question are, of course, kid-sized but look much like their full-size counterparts.

The gift of the five sit-in cars, plus one RC car, was made by the Sturgess Motor Group, located in Leicester, England. They include miniaturized versions of the Fiat 500, Volvo XC90, Jaguar F-Type SVR, Range Rover, and Alfa Romeo 4c. Unsurprisingly, these are all vehicles the dealership offers for sale to grownups. Sturgess also sells electric vehicles (likewise, we presume, to grownups), including the Hyundai Kona Electric, the Jaguar I-Pace, and the Hyundai Ioniq.

The idea is that kids can drive themselves to the operating room and thus take their mind off the impending procedure. Previously, the staff at the hospital had pooled their money together and had one on hand for this purpose, but it eventually became inoperable and hadn't been replaced.

The story reminds us that earlier this year, there was a mini-campaign by British Tesla owners to donate Radio Flyer versions of the Tesla Model S to hospitals in the country. One of those involved, Will Fealey, reached out to Tesla CEO Elon Musk on Twitter (tweet embedded below) for support, who tweeted back that he would personally donate some himself.

We here at InsideEVs love this concept and would like to see more of it happening here. Tesla owners with two referrals get a free kid-sized Radio Flyer Model S and so we would encourage them to consider making a similar type of cars-for-kids donation.

.@Tesla - In the UK owners are donating their spare @RadioFlyer Teslas to various children's hospices and hospitals in the hope of putting smiles on a child's face as they go in for surgery etc. I want to buy a further 24 of these cars, can you help? @elonmusk TY pic.twitter.com/iImaaT1OP1