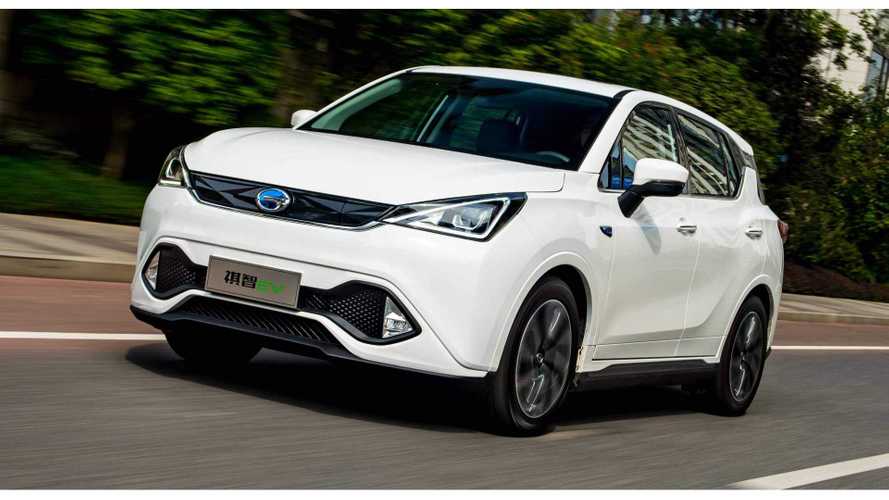 Eupheme is now available in an all-electric version too.

GAC To Get 430 Kuka Robots For Electric Car Production
Earlier this year, Mitsubishi and GAC introduced in China the plug-in hybrid Eupheme, a clear derivative of the Mitsubishi Outlander PHEV.

"The new model supports both Mitsubishi Motors and GAC's strategic growth goals, boosts development of an advanced automotive industry and will help rapid adoption of "new energy vehicle" (NEV)*1 technologies in the world's largest vehicle market.
Twelve key cities will serve as the initial release markets for the Eupheme EV in China, including Beijing, Changsha, Guangzhou, Shenzhen, Hangzhou and Tianjin, with additional locations to be introduced across the country this year.
Eupheme EV has a cruise distance of 410 km (the fuel consumption measurement in China), and combines the powerful torque of electric vehicle with the comfort and interior space of SUV, It will be priced from 135,800 RMB*2 (approximately $20,000) as an advanced and environmentally friendly SUV for Chinese customers.
Commenting on the company's ambitions in China, Mitsubishi Motors Chief Executive Officer Osamu Masuko stated "The launch of Eupheme EV follows the Eupheme Plug-in Hybrid Electric (PHEV) SUV to market and is an important milestone for GMMC. It demonstrates the critical role that EV technology will play in meeting Chinese consumers' needs and contributes to the automotive industry in China. China is one of our most important markets and we look forward to greatly expanding our position in the country during our DRIVE FOR GROWTH plan."
As a strategic partnership, sales and production platform in China, GMMC will play a key role in supporting Mitsubishi Motors three-year DRIVE FOR GROWTH strategic plan. By 2019, Mitsubishi Motors aims to have further strengthened its operations across China by more than doubling the sales units as well as its dealer network, compared with 2016 levels. The company will also focus on expanding its vehicle lineup of four-wheel drive and PHEV SUVs in the country.
*1 : New Energy Vehicles in China are defined as full electric, plug-in hybrid or fuel cell vehicles
*2 : It can be purchased from after receiving the subsidy of NEVs"