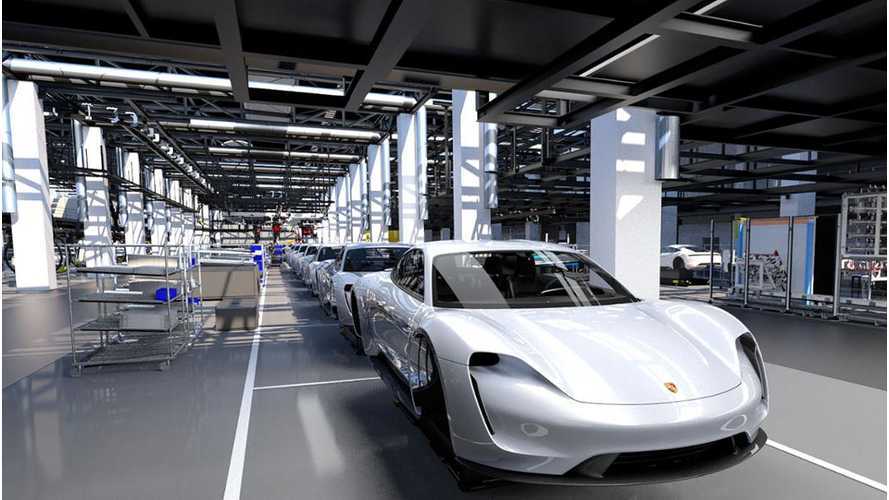 The production of the electric vehicle will be carbon neutral.

Porsche is preparing for the production start of its first-ever all-electric model, the Taycan, with a series of measures that ensure it will “definitely” enter the electric era. The German sports car maker is currently investing six billion euros (approximately $6.94 billion at the current rates), hiring more than 1,200 new employees for its main plant, and launching “an unparalleled knowledge campaign rolled out throughout the entire company.”

The company is building something it calls “a factory within a factory.” This refers to the production and assembly facilities that will produce the all-electric Taycan vehicle at the marque’s Zuffenhausen factory. The whole process of producing and assembling the EV will be carbon neutral and Porsche’s future goal is to establish a complete zero-impact plant with no environmental impact.

“By applying flexi-line production, Porsche will become the first vehicle manufacturer to use driverless transport systems in a continuous series production process,” Albrecht Reimold, Member of the Executive Board responsible for production and logistics, explains some of the ideas behind the new production process.

Porsche says not all 1,200 new workers will be producing the Taycan, as some of them will be responsible for “two-door sports cars,” likely the new generation 911. The manufacturer’s plan for the electric vehicle, previewed by the Mission E concept, is to “create a team with a healthy mix of experienced sports car manufacturers and new staff.”

“The Taycan is one of biggest creators of jobs in the history of Porsche,” confirms Andreas Haffner, Member of the Executive Board responsible for HR and Social Affairs.

As far as the EV itself is concerned, Porsche claims it has developed batteries with “power density the likes of which have never been seen before.” The German company promises the lithium-ion battery can be partly recharged in approximately four minutes, providing enough energy to drive roughly 62 miles (100 kilometers), according to NEDC.