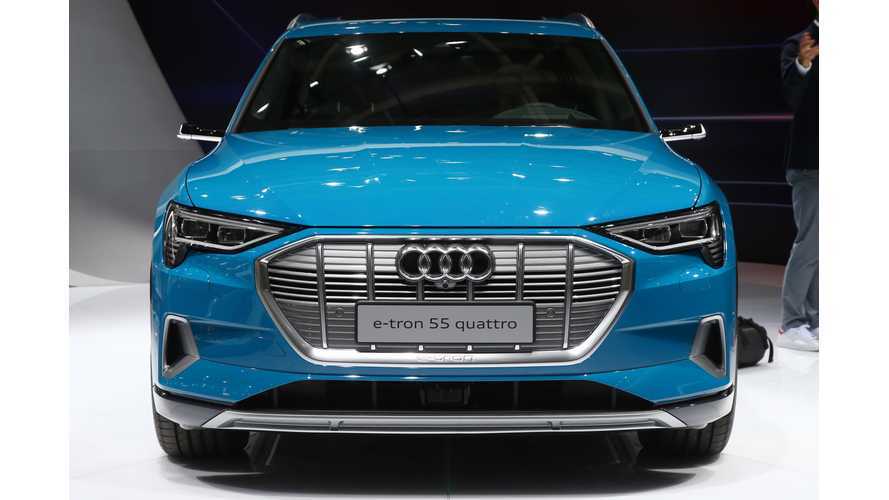 CONFLICTED GERMAN AUTOMAKERS ARGUE ABOUT HOW TO PRODUCE A 'TESLA KILLER'

It’s no secret that the legacy automakers are making the transition to electric vehicles only reluctantly, in response to regulatory pressure from governments and to competitive pressure from Tesla. Contrary to what many seem to believe, Big Auto’s reluctance to embrace EVs is not merely the usual corporate fear of the future, nor is it the result of any oil industry-fueled conspiracy (as far as we know). It’s a simple matter of money - there are good reasons to believe that electrification will take a major bite out of industry profits, as BMW and Daimler execs recently acknowledged.

Above: German automakers remain conflicted about how to transition factory production lines from gas-powered cars to EVs (Image: Werner Budding)

Now Volkswagen has warned that its stated plan to offer an electrified version of each of its models will cost more than it estimated. VW previously predicted that the coming shift to battery power would cost some 20 billion euros ($23 billion). CEO Herbert Diess, in an interview published in VW’s internal newsletter, indicated that this figure was too low, but didn’t offer a new estimate. “The burden for our company, such as the cost of bringing to market electric cars, will be higher than expected,” Diess says. “This is particularly so since some of our competitors have been making more progress.”

A recent article in the Financial Times discussed the challenges legacy carmakers are facing. Whereas industry disruptor Tesla started from a blank slate to design its vehicles, and has “bet the company” on EVs, incumbent OEMs can’t go down that road - the risks are too high. Analysts have warned that a substantial number of Germany’s 800,000 auto industry jobs could disappear along with the internal combustion engine.

FT points out that VW, BMW and Daimler have each earmarked billions of euros for electric technology, but are taking different approaches - some automakers hope to build EVs using the same architecture as legacy vehicles, whereas others intend to introduce new platforms. The choice of strategy “will re-sort the carmakers in profitability,” says Christian Senger, head of the VW’s e-mobility line. “Those who the hardest road will be more successful than the others.”

Volkswagen is leveraging its scale advantage - earlier this year it awarded €20 billion worth of contracts for battery supplies as part of a plan to introduce 50 pure EVs by 2025. This represents an about-face from VW’s previous strategy - the e-Golf and e-Up, introduced in 2013, were basically existing models stuffed with batteries.

“To make it a fully fledged electric car, you need to start with a battery pack between the wheels and then you build up the car,” Herbert Diess, CEO of the VW Group, told the FT. “Then you have an effective battery system, the range, and you get a lot of freedom for the design of the car, to make more interior space with the same footprint.” (His words echo what Tesla designer Von Holzhausen said back in 2011.)

The first VW model designed this way, the ID Neo, is to come out late next year, the first of several models belonging to the ID electric sub-brand. Although recent reports suggest the program could be delayed.

BMW seems to be taking the opposite tack, touting the advantages of “flexible architecture” that can accommodate fossil, hybrid or electric powertrains. BMW plans to offer all its models with a choice of powertrain starting in 2021. “We can’t afford having two factories standing still,” says CEO Harald Krueger. “With a flexible approach you can always manage the capacity of your plants. But if you have a specific EV architecture, what do you with the old one? What do you do with the people?”

Daimler is combining both approaches, designing purpose-built architecture for its EQ sub-brand while also setting up its production plants to accommodate all types of powertrains, including fuel cells. “We have hybrids, plug-in hybrids, electric cars and maybe robo-taxis tomorrow,” says Daimler Production Chief Markus Schaefer. “It’s hard to predict volumes for the best way in an uncertain world, so this is the most efficient approach to supply the market.”

Some analysts think the flexible approach is too complex in both design and production. “I don’t see how they can consolidate traditional platforms, from small hatchbacks to large SUVs, and at the same time try to include EVs in the equation,” says Pelham Smithers Analyst Julie Boote. “That’s incredibly complicated.”

Above: In another revealing move, Audi decided no e-tron inventory for its US dealerships would be made available (Source: Charged / Image: Automobile Propre)

Others see merit in the flexible approach, pointing out that it’s hard to predict how quickly the shift to electric cars will take place. “Most carmakers proceeding with EVs are following an ‘If you build it, they will come’ approach,” says Bernstein Analyst Max Warburton. “If you have a dedicated EV platform and the demand doesn’t come, you’ve lost a lot of money.”