Time To Get Ready For A Flood Of Electric Cars 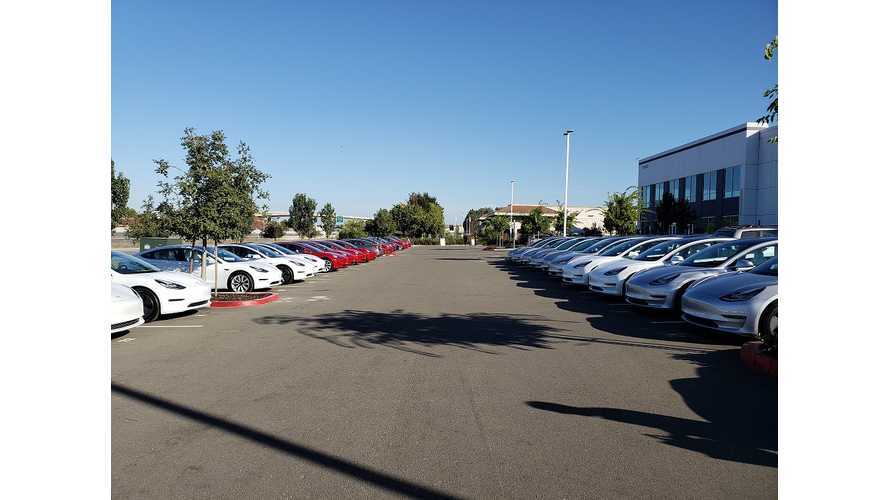 A FLOOD OF ELECTRIC VEHICLES MAY BE COMING

Electric vehicle naysayers often seem to visualize technological change proceeding at a slow and stately pace, ignoring the accelerating trends that are driving EV adoption. But as any mathematician will tell you, exponential growth is a powerful thing, and there are several reasons to believe that electrification is nearing the upward curve in the proverbial hockey stick.

Above: Fleet of Tesla's all-electric Model 3 sedans getting ready for deliveries to the company's patient customers (Image Teslarati via Avron / Twitter)

Monthly EV sales have been increasing slowly but steadily for the past two years, and over the past few months, the growth rate has been accelerating. September plug-in vehicle sales in the US were more than double those of a year ago, thanks to mushrooming Model 3 deliveries. Model 3 is now the fourth-best-selling passenger car in the US. And every Tesla delivered increases the pressure on the legacy automakers to get serious about their own EV programs.

It’s easy to dismiss exponential growth in its early stages (especially if your company has a vested interest in dismissing it). Mainstream news outlets continue to insist that EVs make up less than 1% of the auto market. In fact, the global figure was around 1.7% in April, and it’s likely to crack 2% by the end of the year.

Once exponential growth gets rolling, things can happen at astounding speed. One water droplet in a football stadium doesn’t even dampen the Astroturf, but if the rate of precipitation doubles every minute, the stadium will be flooded in less than an hour.

A new infographic from Raconteur (via Visual Capitalist) illustrates eight ways in which the auto industry is already being transformed by electric vehicles. Projections from Morgan Stanley indicate that EV sales will surpass legacy vehicle sales by 2038, and the global fleet of EVs will number one billion by 2047 (many EV industry observers would call these predictions conservative).

The transition to electricity will be a game changer for carmakers. As Reuters recently pointed out, EVs are currently a money-loser for Big Auto, but Morgan Stanley expects the negative profit margins to peak in 2023, and turn positive by 2029.