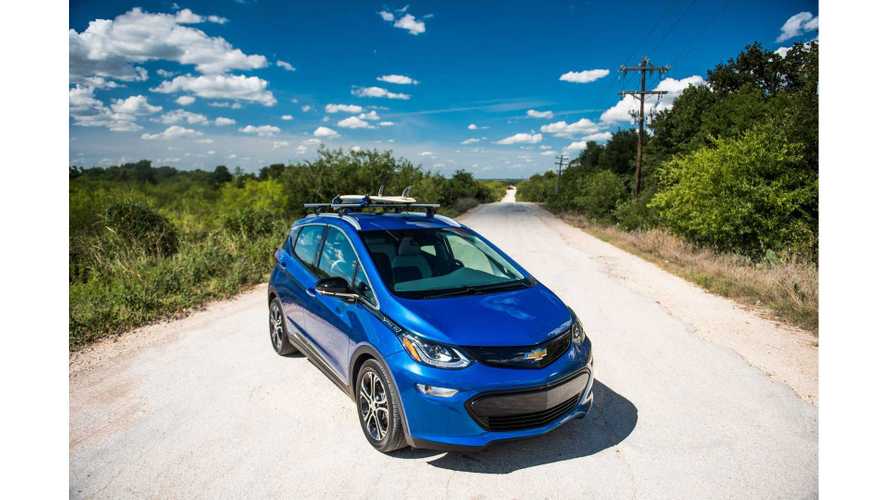 This past weekend I embarked on a spontaneous 470-mile round trip drive to go to an Ed Sheeran concert in Pittsburgh to celebrate 11 years of marriage to my wife. I initially had suggested a trip to Florida in November as a delayed anniversary gift, but the wife said: “Hey, there’s a concert in Pittsburgh today…let’s just go to that!” As I did not want to disappoint the wife, we were soon on the road in our Bolt EV! I was hoping this anniversary trip would not lead to a divorce filing!

The distance from Woodstock, MD to Pittsburgh, PA was 230 miles one way, and it included a 177 mile stretch of highway that has exactly *0* CCS fast-charging stations (or any charging stations the Bolt could use, for that matter). There were a handful of fast charging options around the Pittsburgh area (including in a parking garage near the concert venue at PNC Park) that I could use to charge, though I had no clue if those stations would actually be available. Eh, don't sweat the details, right?

Not exactly the most road trip friendly setup.

While the drive to Pittsburgh was around 230 miles, theoretically within the Bolt’s official 238-mile range, there was a significant elevation gain during the drive from near sea level to 2,500 feet. To make matters worse, this elevation gain was smack dab in the middle of the route, so it needed to be traversed regardless of the direction of travel.

Not wanting to roll the dice that I could make it to Pittsburgh on a single charge, after leaving home with a100% charge good for 240 miles according to the Bolt's range meter, I decided to “top off” my Bolt at a fast charging station in Hagerstown, MD 60 miles away for 15 minute pit stop to ensure I had enough battery to make it to Pittsburgh.

After putting in about 5 kWh of charge into the battery, the GOM told me I had 205 miles of estimated range to cover 177 miles. I figured that was enough of a buffer. Aware of the elevation gain and being the first time I had ever driven this route, I decided to take it easy, driving 60 mph where the speed limit was 70, as there was plenty of time to get to the concert venue.

Despite the conservative speeds, I watched my range buffer slowly shrink as the elevation slowly gained. At one point during the drive, my range buffer had been reduced to 4 miles, and if I turned on the HVAC, the estimated miles remaining actually dipped below the 'miles to destination' Google Maps in my center display reported (the Bolt subtracts range if you turn on the HVAC to account for energy usage). Knowing that eventually, I would soon start the descent down towards Pittsburgh, I drove on without too much worry.

Finally, the elevation stopped climbing and the rate which I was losing estimated miles slowed down too. The nearly non-existent range buffer I had when I had reached the summit of the drive ended up growing to nearly 40 miles by the time we entered Pittsburgh. After finding the parking garage with the only CCS fast charging stations within 20 miles and plugging in (both stariost open. Woohoo!) I observed my Bolt had 13% charge and 38 miles of range remaining. The parking garage was nestled right between Heinz Field and PNC Park, which were pretty cool to finally see in person.

25 kW fast charging? Better than nothing.

I’ll skip details of the actual concert itself, but the wife had a good time, so that’s all that really matters I guess. While the concert lasted over 3 hours, I realized that the charging station (what I found out later was a measly 25 kW CCS station) had a 1-hour auto shutoff, and there was no way to reinitiate a charging session remotely. Attempts to contact garage staff also failed.

Reflecting back on the charging station setup, I determined that it was one of the dumber charging arrangements I’ve seen. Ignoring the fact they were 25 kW “fast charging” stations, most people parking in that garage were likely attending sporting events or concerts, usually 3+ hour affairs that don’t allow you to return to the facility once you leave, so after 1 hour, you were for all intents and purposes, done charging till you returned to your car. I found that I had gained 77 miles of range in 1 hour (33% SOC added to the battery), which after doing the math, I realized a 7.2 kW L2 charging station would have added more miles (90-100 miles in 4 hours). Someone really dropped the ball with this station by having a 60-minute hard shutoff.

After we finally escaped Pittsburgh after being stuck in horrific traffic for what seemed like forever, we headed towards an EVgo station about 20 miles east of Pittsburgh which was on the route home. It was a single EVgo station located in a strip mall that was next to an Applebee’s in Monroesville, PA. I was able to plug in and rest for about 30 minutrs while my Bolt charged up. The next charging station was over 170 miles away in Hagerstown, MD, and I knew a significant elevation gain was ahead, so I made sure to give myself at least a 25-mile buffer. Turns out that was barely enough.

During the lonely drive to Hagerstown, I slowly watched the elevation climb in my TorquePro app while my range meter dropped faster than the miles I was covering. To make matters worse, it was very humid and chilly outside, which was the perfect recipe for my windshield fogging up, requiring me to turn on the defroster from time to time. Each time I turned on the defroster, precious electrons were zapped from my battery. About halfway into my 177-mile leg, the Bolt’s GOM spits out a number that was 8 miles less than the miles I still needed to drive. I knew that soon I would start a descent down from my current 2,500 elevation, but seeing a range number less than the miles-to-go number is always unnerving.

Fortunately, I was soon back several miles to the good and made it to the fast charger at the Hagerstown Premium Outlets with my Bolt’s GOM merely blinking “LOW”.

As I pulled up to the lone CCS charging station, I saw that a Leaf was plugged in! And he was plugged into the combo CCS/CHAdeMO station, and not the standalone CHAdeMO station just a few feet away! (Great ettiquette guy). The nightmare scenario! Who the heck was charging at an Outlet mall at 4 AM in the morning on a Sunday??? Besides me, that is. By some stroke of good luck, the Leaf was not actively charging despite being plugged in (and the owner was nowhere to be found), so I quickly plugged my Bolt in and swiped my EVgo card to activate the charge session. As home was only 58 miles away (this EVgo station was a 125 amp variety, not one of those fake “50 kW” 100 amp stations), so a 20-25 minute charge was all I needed to make it home. After 24 minutes of charging and a seemingly plentiful 78 miles of range, I unplugged and drove like a bat out of hell towards home (and then a slightly slower bat out of hell once I realized I was driving too fast to make it home without stopping to charge again). Made it home with plenty of range to spare!

Living on the edge!

So aside from telling a tale of a not completely stress-free trip to Pittsburgh and back in my Bolt in a single day, what is the point of this story? It’s to show how while the CCS fast-charging network has improved immensely compared to a couple of years ago (this trip would not have been possible 2 years ago), and it is possible to travel long distances in a 200+ mile BEV like the Bolt (it's not Tesla or bust for EV road trips), the infrastructure still isn’t quite there yet for worry-free travel. The Electrify America initiative is definitely a big step in the right direction, and with charging networks like Chargepoint and EVgo continuing to deploy their own fast-charging stations (with GM being rumored to be working on their own ultra-fast charging network), the CCS charging infrastructure will only continue to improve. For those of us willing to be adventurous and take a little risk, there is no need to wait to embark on those road trips. Just need to have a little bit of a clue and some patience.

P.S. also found out being worried about running out of range is great for keeping you awake during a graveyard shift drive!