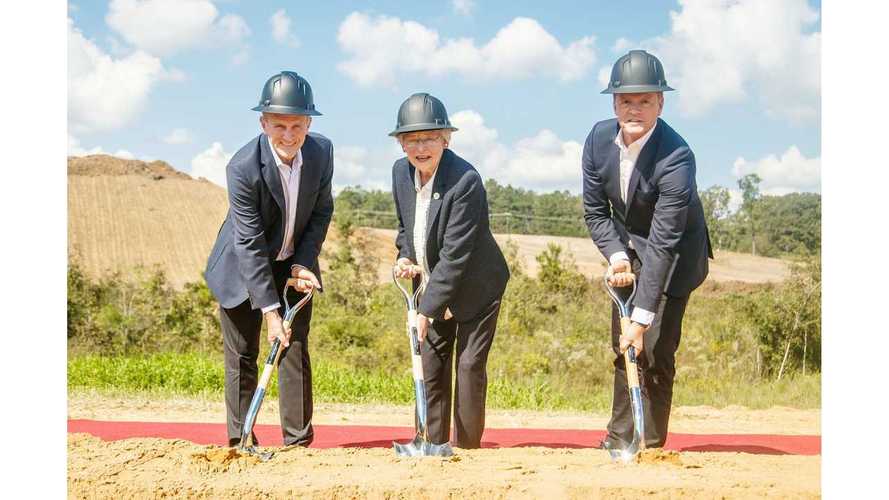 As announced in September 2017, Daimler starts construction of the battery pack factory in the U.S., seven miles from its Mercedes-Benz Cars vehicle production site in Tuscaloosa, Alabama.

The battery factory is the biggest part of the latest $1 billion investment in the production facilities in Tuscaloosa. Daimler intends to produce packs for EQ-branded all-electric and/or plug-in hybrid models. There are no details onmodels or production volume for now, besides "for future electric SUV under the EQ brand".

"One year ago, we have announced $1 billion investment in Tuscaloosa mostly for the production of electric SUVs and a battery plant. We are bringing electric mobility for Mercedes-Benz to the United States."

"The investment of billions of US-Dollars in the U.S. car production of Mercedes-Benz is paying off: The first all new Mercedes-Benz GLE left the production lines bringing a new driver experience to our customers worldwide. At the same time, the electric initiative of Mercedes-Benz Cars in the U.S. is well on track. A groundbreaking ceremony marks the start of the construction of a new battery factory. The factory next to the vehicle plant in Tuscaloosa providing batteries for future electric SUV under the EQ brand."

Daimler annocuned that battery packs for various models will be produced at eight factories at six sites around the world. We can identify seven factories (seems that one more will be announced).

Batteries will be supplied for more than 130 electrified models, scheduled for introduction by 2022.

"The new battery facility near the Tuscaloosa plant is part of a global battery production network of in total eight factories in Kamenz, (Germany), Stuttgart-Untertürkheim (Germany), Sindelfingen (Germany), Beijing (China), Bangkok (Thailand) and Tuscaloosa (USA). The worldwide network of battery factories allows Mercedes-Benz to react flexibly and efficiently to market demands and requirements. The different sites supply local vehicle production and are ready to export batteries, if required. Mercedes-Benz Cars will offer at least one electrified vehicle in each model series by 2022 totaling up to more than 130 models. Mercedes-Benz is about to start the production of electric passenger cars as part of its worldwide electric initiative. This includes the production of an all-electric SUV in the U.S."

Electric Initiative in the U.S. well on track: Mercedes-Benz starts construction for battery factory next to U.S. vehicle plant

Official start of construction works for the new battery factory nearby the Mercedes-Benz plant Tuscaloosa (Mercedes-Benz U.S. International – MBUSI/Alabama): Markus Schäfer, Member of the Divisional Board of Management Mercedes-Benz Cars, Production and Supply Chain, with Kay Ivey, Governor of Alabama, and Jason Hoff, President and CEO of MBUSI (L to R)

Tuscaloosa, AL/USA - The investment of billions of US-Dollars in the U.S. car production of Mercedes-Benz is paying off: The first all new Mercedes-Benz GLE which is based on a completely new SUV platform, left the production lines today bringing a new driver experience to our customers worldwide. At the same time, the electric initiative of Mercedes-Benz Cars in the U.S. is well on track. A groundbreaking ceremony today marks the start of the construction of a new battery factory. The factory will be built near the vehicle production site in Tuscaloosa providing batteries for future electric SUV under the product and technology brand EQ.

Markus Schäfer, Member of the Divisional Board of Mercedes-Benz Cars, Production and Supply Chain, attended the ceremony: "The widely export oriented Mercedes-Benz plant in Tuscaloosa is a high-tech production facility with a successful history and an exciting future in terms of our brand in the United States. We aim to play a pioneering role in the development of e-mobility and are well prepared to accomplish this mission. One year ago, we have announced $1 billion investment in Tuscaloosa mostly for the production of electric SUVs and a battery plant. We are bringing electric mobility for Mercedes-Benz to the United States. Around the globe, we are preparing six sites for production of EQ models and our battery network will consist of eight factories."

The groundbreaking ceremony took place in the presence of Jason Hoff, President and CEO of Mercedes-Benz U.S International, the Governor of Alabama Kay Ivey and other distinguished regional and international guests at its location in Bibb County, Alabama. The new production site for batteries - along with the new Consolidation Center - is located seven miles from the Mercedes-Benz Cars vehicle production site in Tuscaloosa. The Consolidation Center, also announced as part of the 2017 investment announcement, will consist of three major areas, including the body parts preparation area, the assembly parts preparation area and the empties storage. It is expected to be operational in 2019.

More than $6 billion has already been invested in the Tuscaloosa plant since 1995. The additional $1 billion will help Mercedes-Benz Cars expand its industrial footprint in the region, most of which is slated for the electric initiative. It is expected that, once completed, these investments will create more than 600 additional jobs in Alabama.

New GLE made in Tuscaloosa

Prior to the groundbreaking ceremony, Mercedes-Benz U.S. International, Inc. (MBUSI) today celebrated the start of production of the first new Mercedes-Benz GLE. Tuscaloosa has served as the traditional production site for SUVs since 1997. This factory supplies the current GLE, GLE Coupé and GLS models to customers worldwide. These models are made exclusively in Alabama and two thirds of them are exported to almost every country in the world. Therewith MBUSI is the second largest automotive exporter in the U.S. More than two million customers have decided in favor of the off-roader since the launch of the M-Class, and the GLE is the bestselling SUV in the history of Mercedes-Benz. Worldwide, more than five million customers have opted for an SUV made by Mercedes-Benz. A new record was set by the SUVs in the first eight months of this year: Worldwide, more than 540,000 units were delivered, an increase of 5.4%. With the start of production of the new Mercedes-Benz GLE the plant will enhance its proven production portfolio. The new GLE is better in every aspect: more capable on the road, more capable off the road and more capable in bringing friends and family along: now with an optional third row of seats. And the new E-ACTIVE-BODY-CONTROL chassis offers a new dimension of a smooth ride.

"The successful story of the Mercedes-Benz Tuscaloosa plant began with the start of production of the M-Class 21 years ago. We are proud to see further investment into Tuscaloosa, which underlines the effort and teamwork by all our team members. As a team here in Tuscaloosa, we play a key role in the global success of Mercedes-Benz and we are proud that the all new GLE will again be produced in Alabama for the world demand”, said Jason Hoff, President and CEO of Mercedes-Benz U.S. International.

Only two years after inventing the car, Daimler started business in the U.S. as the first ever car manufacturer back in 1888. For 130 years, Daimler has been anchored within the U.S. economy and has contributed to its development, generates and secures jobs as well as promoting new technologies and the plant is on track to continue to do so in the future.

"Just as Mercedes helped put our state on the cutting-edge of automotive manufacturing, Alabama will help put Mercedes on the cutting-edge of electric vehicle development,” Governor Kay Ivey said. “We continuously strive to reaffirm the ‘Made in Alabama’ brand as one of excellence. So, naturally, there is no better state for Mercedes to build upon their world-class brand of excellence than right here in Alabama."

The Electric Initiative in the United States

MBUSI – located in Tuscaloosa County, Alabama - is the production location for the GLE, GLS and GLE Coupe SUVs around the world, as well as the C-Class sedan for North America. In 2017, the plant produced around 300,000 vehicles. MBUSI currently employs more than 3,700 team members on the approximately 1,000 acres site and it supports more than an estimated 10,000 indirect jobs at suppliers and service providers in the region. In its 20 year existence, more than $6 billion have been invested in the plant to pave the way for the production of future SUV’s. The expansion makes plant Tuscaloosa one of the “smartest” automotive facilities in the world.

About Daimler in the U.S.

Daimler Group subsidiaries have been firmly established in the United States for decades. As employers, exporters, and good corporate citizens, they provide billions of dollars in direct and indirect support to the U.S. economy. Daimler Group Companies employ around 26,000 people in the United States. The Companies indirectly support an estimated 150,000 additional jobs across the country. At 23 main locations throughout the USA the Group’s subsidiaries primarily manufacture passenger cars and commercial vehicles, but is also represented with Daimler Financial Services, car2go and moovel as well as several Research and Development locations.