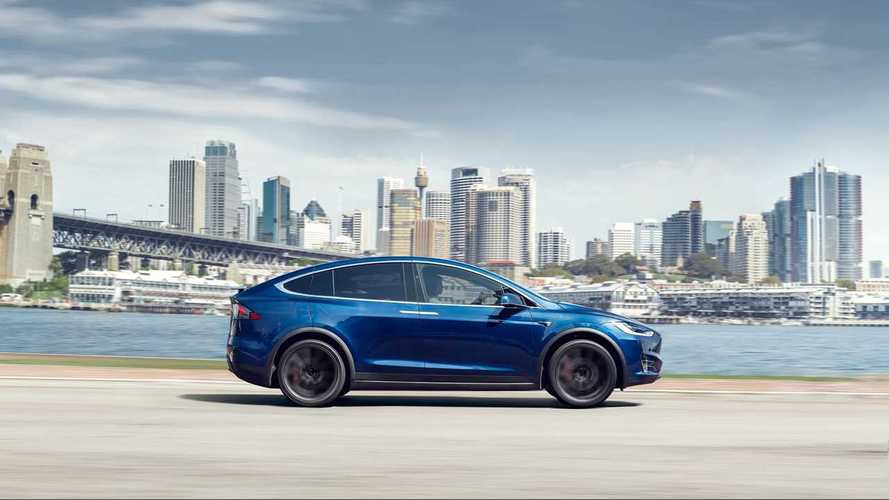 With all the attention focused on the Tesla Model 3 these days, it's hard to remember that Tesla's SUV, its Model X, is still considered an industry game changer. Steve Siler (via Car and Driver) recently got a chance to review the 2018 Tesla Model X 100D, noting that its many fun features "contribute to a character that can be described as fresh, digitized, and futuristic... a car that offers plenty of novelty."

After spending time in the Model X, certain features stand out. The vegan leather "white premium interior upgrade gives the space a bit of a Buck Rogers starship vibe." And, "the gigantic windshield that extends uninterrupted over the front passengers' heads just seems cooler each time we drive a Model X... The view out is truly spectacular." Yet, the "novelty wears off" of the dramatic "attention-getting...  slow" falcon wing doors.

That said, "The Model X doesn't need these Tesla-isms to earn its stripes as a standard-setting electric vehicle." Tesla's SUV is more than road trip capable as "it boasts an EPA-estimated 295 miles of range, thanks to its potent, 100.0-kWh battery pack tucked beneath the floor, making it the longest-range electrified crossover on the market." And Tesla's Supercharger network is growing rapidly while "recharging is admirably speedy."

When compared to other electric cars, Siler points out a significant Tesla advantage: "the car will remind you while you're still within range of one of Tesla's Supercharger stations, the population of which has risen to 1342 different locations and more than 11,000 individual stalls." Compared to Car and Driver's last count, "that's a huge jump from the mere 400 or so locations and 2000 chargers available three years ago."

Where the Model X really shines is its performance. "Even though there's no Ludicrous mode as in the P100D, the 100D's relative silence, high seating position, and considerable cabin width—combined with the unobstructed view of the outside world becoming a blur—make full-throttle acceleration an immersive experience," writes Siler. And this SUV is no slouch. "Tesla estimates a 4.7-second zero-to-60-mph time" for the 100D. In addition, "Handling is respectable, thanks no doubt to a low center of gravity."

Above: The dancing Model X Holiday Show draws a crowd at the Eiffel Tower in Paris (Youtube: Bjørn Nyland)

Siler found many of the Model X Easter eggs, like the Holiday Show "audio/visual extravaganza" to be one of many "surreal moments" to be had in the Model X. While other innovative features like "Tesla's nifty Summon... solve a problem no other car in the world presents." He concludes, "If some of its novelties are silly... plenty of others are not. And the 100D version proves that you don't need Ludicrous mode to feel as if you've entered the future."