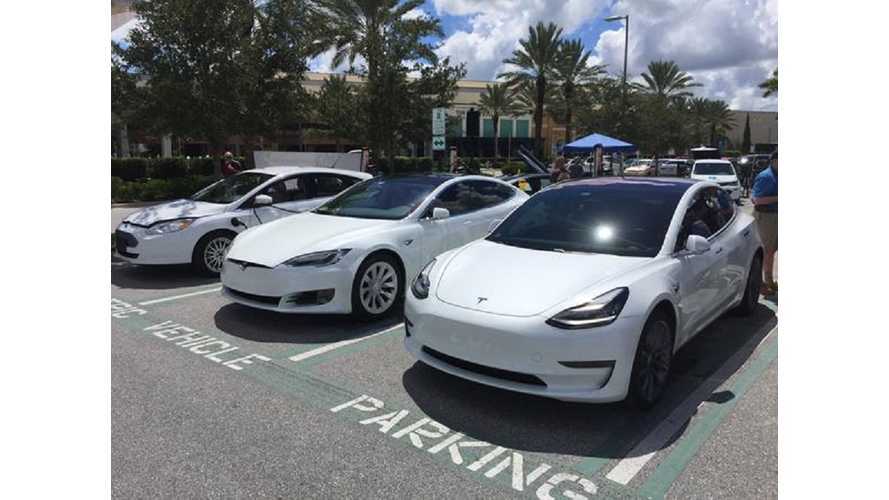 I had a fantastic time at this year's National Drive Electric Week event in Sarasota, Florida. But, that was just one event. It turns out, according to Mary Lunetta (via Sierra Club's Compass), "In its eighth annual celebration, National Drive Electric Week (NDEW) broke every record, with more than 180,000 people attending 321 events in three nations and all 50 states."

Above: Three of four Tesla Model 3s that showed up at the Golden, CO event; the one on the left had 26 miles on the odometer because its owners came straight from taking delivery of it at Tesla's store in Littleton (Photo Credit: Jim Smith)

Some significant milestones occurred at a bunch of NDEW events this year. For instance, "Retailer L.L. Bean announced plans to host the largest number of charging stations in Maine at its flagship store, and California Governor Brown signed multiple bills to reinforce the state’s fight against climate change and boost the state’s electric vehicle market."

Above: Electric cars at an event in Middletown, CT (Photo Credit: Andrew Kasznay)

Ride-and-drives, driveway chats, and family-friendly festivals gave electric vehicle owners a chance to showcase the benefits (and value) of EVs. Gina Coplon-Newfield, the Sierra Club's Clean Transportation for All Director, explains: "Across the country, it’s clear that people are tired of the same old gas-guzzling cars and buses — they want clean transportation, and they want it now."

Above: A look at the NDEW event in West Windsor, NJ (Youtube: NJRE)

Check out the gallery below to catch a glimpse of National Drive Electric Week as it unfolded all across the country (and world) this year...

Above: NDEW's City Captain Garrick Garcia in Kihei, HI explains his excitement about EVs with a fleet of Teslas in the background (Photo Credit: Deanna Garcia)

Above: A Fiat 500e and Nissan Leaf parked nearby a Tesla Model X at the Fargo, ND event (Photo Credit: William Weightman)