We heard that Tesla is giving its customers a dashcam functionality in Version 9 of the vehicles' software, among a host of other features, and this appears to be the first bit of footage of it to go public (no pun intended). Feast your eyes.

More about the Tesla Dashcam 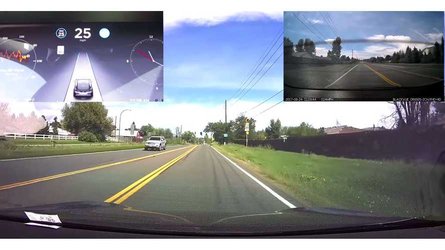 Shot at night and posted on the Marc Benton Youtube channel, the picture quality is not bad when his Model 3 is immobile, but once it starts moving, things degrade somewhat. Daytime may produce more favorable results.

Compared to dashcams available on the aftermarket, it may not be the very best of the best, but it's not bad. And while there may be room for improvement, we have little doubt that will come. Either via over-the-air algorithm updates, upgraded hardware, or a combination of both, the feature will quite likely be upgraded over time. We suspect this may be so popular among owners, other manufacturers will start offering a similar feature.

The poster also tweeted out (embedded below) instructions about how to capture the footage on a prepared USB stick. Basically, you plug in a USB drive prepared with a folder named "TeslaCam" into the slot on the front console. An icon should appear in the status bar, with a red dot to indicate it's recording. A tap saves you a ten-minute clip, or you can press and hold to pause it.

As a bonus, scroll down further and we've also embedded a tweet from Mr. Benton that shows how the Version 9 update displays humans on the Autopilot screen. Enjoy!