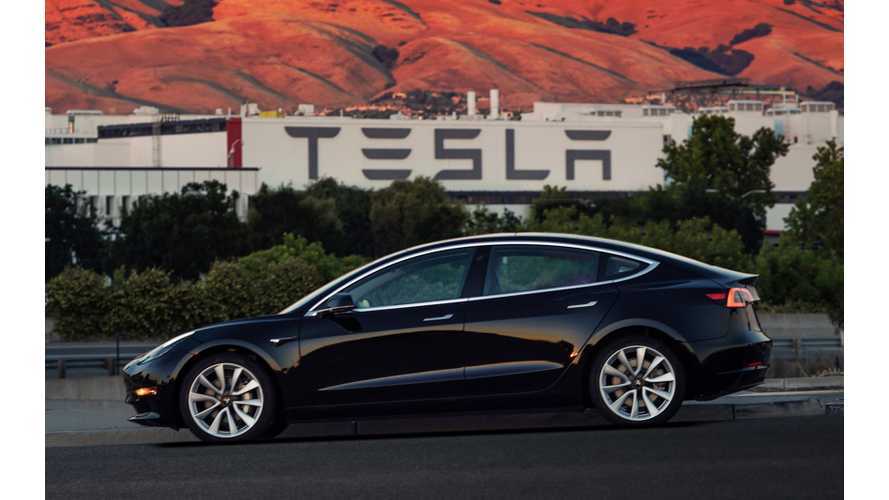 September shatters records and goes down in the history books, but it will soon be surpassed.

Based on automakers' sales reports and our estimates, we report a total of 44,589 plug-in electric vehicles were sold in the U.S. in September, compared to last year's 21,242 and last month's 36,380.  Needless to say, it was the best month of all time by leaps and bounds! Not to mention the monumental level of records broken by the Tesla Model 3.

Again, four out of five months in 2018 have claimed a spot on our list of top months of all time for U.S. EV sales. To say that Tesla is ludicrously dominating the U.S. market - as well as making waves globally - would honestly be an understatement. Anyone have a more assertive word than "ludicrous"? We're taking suggestions. Anyhow, way too much news on that to share here, but check out our news feed for significant coverage.

The Tesla Model 3 topped our chart by a landslide, with 78,132 estimated deliveries. This makes it nine months in a row that the Model 3 has been the U.S. EV sales leader. It is so far beyond all other models there's just no way to compare. It also accounts for about half of all EV sales in the U.S. for September and about one-third of all plug-in electric car sales for the year to date.

If you include the Model S and Model X (3rd and 4th on the year, respectively), Tesla delivered an estimated 29,975 vehicles last month, which accounts for about two-thirds of all EVs sold in the U.S. in September. Based on our estimates - for the year as a whole - Tesla has sold a whopping 114,102 vehicles in the U.S. out of a total of some ~234,635 overall EV sales to date. Soon, the automaker should be accounting for over half of all electric vehicles sold in the U.S. for 2018. Whether or not you're a Tesla fan, this is truly incredible news for EV market share and adoption.

Ok, time to move forward to the other top-selling electric vehicles in the U.S. this September:

Not surprisingly, the Toyota Prius Prime lands in the four-spot for the month and the second-place position for the year as a whole, with sales on the rise from last month, at 2,213.

The Honda Clarity PHEV and Nissan LEAF were the only other vehicles to sell over 1,000 copies in September, landing the cars in the fifth and sixth positions on our sales chart for the month and No. 7 and 8 on the year, respectively. LEAF sales improved from last month and last year, totaling 1,563 for September 2018. The Clarity dials it up substantially, with an estimated 2,028 Plug-in Hybrids delivered in the U.S. last month. This also means that Honda soars past BMW on our list of top EV manufacturers and nearly catches Toyota!

Other Statistical Points of Interest from September 2018