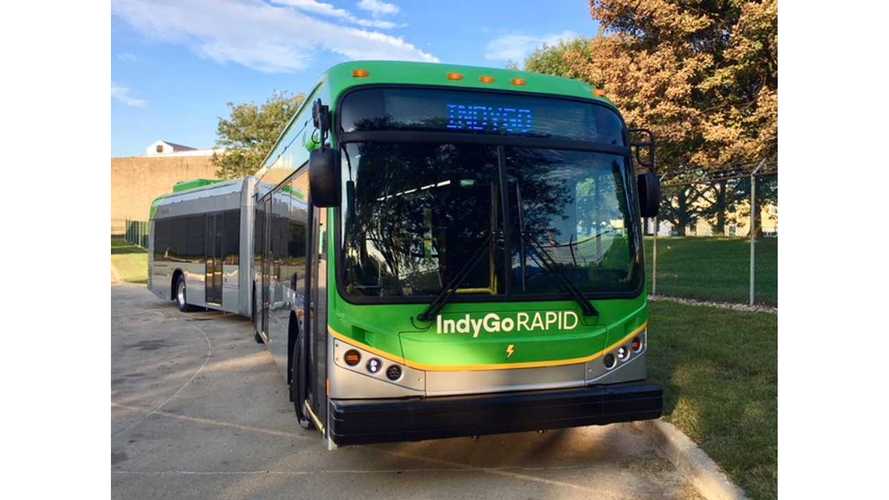 BYD delivered the first out of 13 ordered 60-foot articulated buses - the K11 - to IndyGo in Indianapolis for cleaner and quieter transportation.

Electric buses will be used first on the 13.1-mile Red Line between Broad Ripple on the north side of the city and the University of Indianapolis on the south side.

Part of the electricity required for charging will come from 1 MW solar installation mounted atop IndyGo’s garage, which shows that the agency thought comprehensively.

For IndyGo, it's just the beginning as by 2032 the entire fleet of diesel buses will be replaced by electric.

"This K11 will serve IndyGo’s Red Line, a 13.1-mile route that runs between Broad Ripple on the north side of the city and the University of Indianapolis on the south side, offering more frequent service and longer hours than current routes. The Red Line is the densest corridor in terms of population and employment within Marion County,"

"By using electric buses, IndyGo will reduce noise and its use of diesel fuel and the emissions that come from it.  At least some of the energy required to charge the buses will be derived from a 1 megawatt solar system mounted atop IndyGo’s garage.

BYD was the first firm in the world to design and manufacture a 60-foot battery-electric bus.  The K11 is an affordable, dependable, and American-manufactured bus that can integrate easily into a transit fleet, offering a clean, zero-emission alternative to diesel-fueled buses.  The K11 is powered by revolutionary iron-phosphate batteries that are non-toxic and environmentally friendly. The safest in the industry, the batteries come with a 12-year warranty, and BYD was the first to offer such a plan.

Powerful in-wheel motors provide instant torque for great performance in all driving conditions. Regenerative breaking reduces wear while capturing energy to charge the battery. This bus can be charged in 3.5 hours and can also be used as a mobile power supply."

“BYD has delivered the first bus on time and this allows us to begin working with operations and emergency services on training, and testing battery range. IndyGo is committed to our transition to an all-electric fleet over the next 15 years.”

“We are very proud to be part of IndyGo’s transformation to an all-electric transit fleet. The K11 bus is an innovative, green technology solution for the transit needs of Indianapolis and Marion County.”