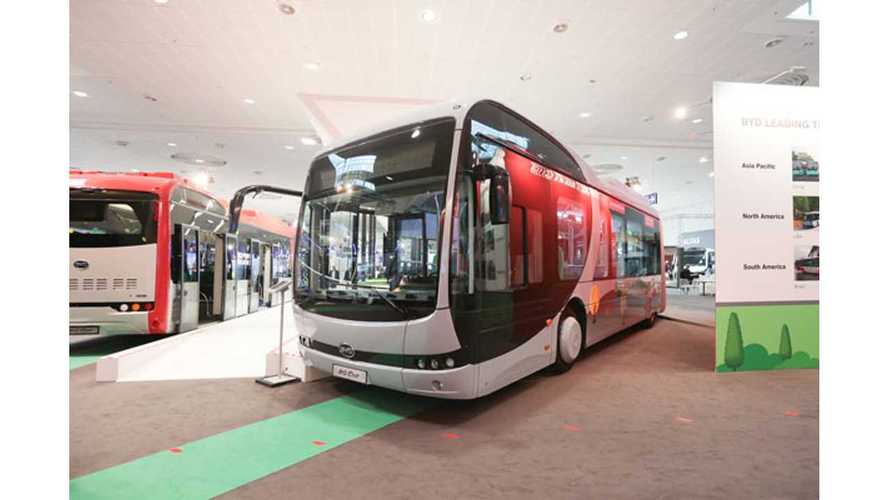 Chinese manufacturer BYD is doing well in the European bus market, since launching local production (first in Hungary, and then also in France) as well as thanks to its partnership with Alexander Dennis Limited (ADL) in the UK.

The company already delivered or received orders for more than 600 electric buses in Europe, which is one of the highest results (if not the highest) on the continent.

Great demand is noted in Scandinavia, particularly in Sweden and Norway, where in 2018 already more than 100 buses were sold. The milestone of 100 units was recently achieved thanks to an order for 26 buses for Nobina in Sweden (11 of the 12m ebuses, 10 of the 18m articulated ebuses and 5 of the 8.7m midi buses). Deliveries are scheduled for summer of 2019.

"The buses will be servicing routes in Lidkoping (12m), Boras (18m articulated), and Ale (midi bus) in south-west Sweden. The routes are under the control of Västtrafik, the agency responsible for public transport services in the south-west Swedish county Västra Götaland.BYD already has buses running in several cities in Sweden, including Eskilstuna and Ängelholm and recently also Norrtälje. Including these recent orders in Sweden, BYD has become the leader in electric buses in the Swedish market. With these new orders, BYD has received orders for more than 100 electric buses in 2018 in Scandinavia.

The 5 midi buses are the first electric midi bus order in Sweden and the whole of Scandinavia. BYD has previously confirmed midi bus orders for the Netherlands and Italy. Sweden is, after Norway, the second European country to have placed orders for the BYD articulated ebus. An earlier order for a total of 44 artics to Oslo was also placed by Nobina."

“There is a rapid growth in the Nordic e-bus market. Where new technology and electric solutions are enablers for a more attractive and sustainable public transport – offering a cleaner, quieter and more comfortable traffic – we are determined to be in the forefront developing and introducing smart and sustainable e-bus solutions to the public transport authorities of the Nordics.

“Scandinavia has become the fastest growing market for BYD in Europe and is a remarkable success story particularly given both the tough climatic conditions and the strong competitors. With these new orders won for over 100 ebuses in 2018 so far, needless to say that we are delighted with our progress not only commercially but in support of improving air quality in the Nordics.”