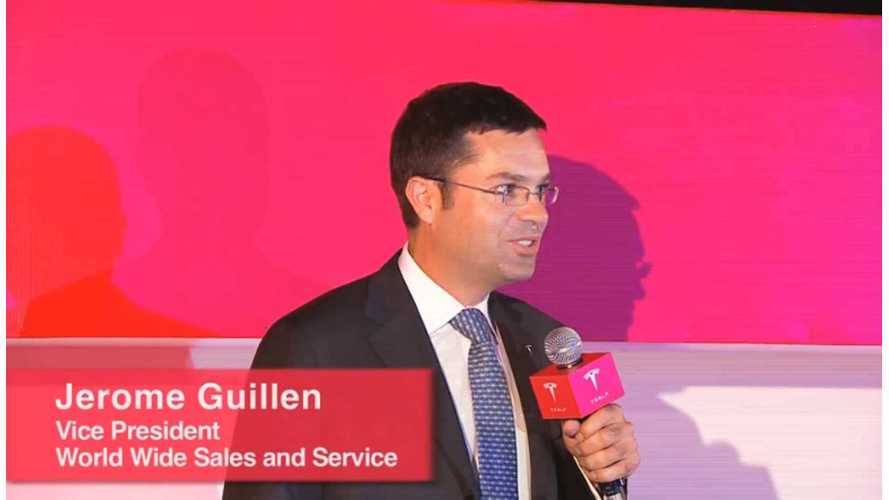 TESLA’S NEW PRESIDENT IS KNOWN AS ‘THE FIXER'

Both Tesla fanboys and TSLA shorts seem to agree on one thing — Elon Musk could use some rest. He, however, disagrees. Nevertheless, many were relieved when Musk recently announced that "Jerome Guillen has been promoted to President, Automotive...  oversee all automotive operations and program management, as well as coordinate our extensive automotive supply chain."

According to Bloomberg, "Outside of Tesla Inc., Jerome Guillen is hardly a household name. But to some of the earliest, die-hard customers who bought Tesla’s first Model S sedans, a fixer is getting the promotion he deserves, and chief executive officer Elon Musk is getting help he desperately needs."

"In Guillen, 46, Tesla has promoted a skilled multitasker who’s proven able to operate at the breakneck speed his abrasive boss demands. Some investors have called for the carmaker to find a Musk whisperer along the lines of Gwynne Shotwell — the chief operating officer who helps him run Space Exploration Technologies Corp. — so that the CEO can navigate his way back from a dramatic period," Bloomberg reports.

“Jerome is great,” Musk said. “He has made a huge difference to Tesla many times over.” Most recently, Guillen was overseeing the Semi program — not surprising as he came to Tesla from Daimler’s truck division, where he oversaw development of the Cascadia heavy duty semi trailer. According to Musk, "At Daimler, he led their most successful semi truck program ever."

Above: Guillen was recently heading up the Tesla Semi program (Image: Teslarati via Sergey MoldovanAmerican)

Prior to the Tesla Semi program, Guillen held a wide range of posts at the Silicon Valley carmaker ranging from Model S program director to heading up the company's sales, service and deliveries. Most recently, he was "the brains behind the Model 3 assembly line built, against all odds, under a tent outside Tesla’s car factory." This remarkable feat was considered "instrumental to the company finally delivering on a production target this summer."

A former Tesla co-worker, Neil Joseph, recalls Guillen typically arrived at the office by 6 a.m. and would work late into the evening. Joseph says, "What rocked my mind every single day for that year I sat next to him was his ability to multitask... He would be on a Webex call, he’d be working on these detailed spreadsheets, he’d be sending emails, and it would all be extremely precise."

Andrew Wolfe, a 2012 Model S owner, has communicated with Guillen over the years bouncing suggestions (and frustrations) off of "Musk's fixer." Wolfe says, "Jerome has been around for a long time and is clearly trusted by Elon. He has a history of being the guy they send in to deal with stuff going wrong.”

Above: Tesla's Jerome Guillen hosting a launch event for the Model S in Hong Kong back in 2014 (Youtube: Tesla)

Ed Kim, analyst at car-consulting firm AutoPacific notes, "It’s no secret that Musk has been overstressed and overworked... Guillen, as an eight-year veteran of Tesla, knows the company’s operations inside and out and should be more than able to oversee the company’s day to day activities. This should give Musk more bandwidth."