As the official unveiling nears, Audi releases another e-tron teaser.

Audi will take the cover off its all-new 2019 e-tron electric vehicle next week. InsideEVs will be in attendance at the much-anticipated event in San Francisco on Monday, September 17. We can't wait to finally see the car without the camo, although we admit that we've started to take a liking to the black, white, and red e-tron that we've seen so much of. Yesterday, we shared the automaker's first new teaser, and above you'll see another. 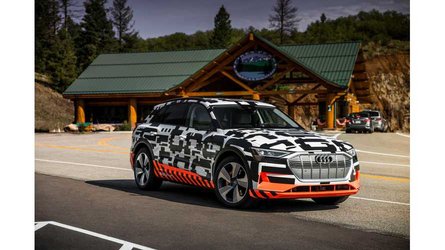 While we don't have any official specs (hopefully that will change next week), Audi has previously shared that the e-tron will feature dual electric motors delivering a combined 355 horsepower (265 kilowatts) and 414 pound-feet (561 Newton-meters) of torque. A boost mode will allow the powertrain to push out 402 hp and 490 lb-ft (664 Nm) for eight seconds.

According to Audi, the e-tron will offer over 248.5 miles of range (400 kilometers) in the World Harmonized Light Vehicle Test Procedure (WLTP) cycle by way of a 95-kWh battery pack. It's expected to pull off a zero-to-62 mph (100 kph) sprint in under six seconds. Keep in mind that no official EPA figures or estimates are available at this time.

The 2019 Audi e-tron is already in production, however, we don't have information about when it will go on sale in the U.S. Audi will be broadcasting the upcoming premiere live via satellite over the internet and on smartTV.

Electric has gone thrilling. World premiere of the first fully electric Audi, with virtual side mirrors. The Audi e-tron. On September 18, live unveiling.

Electric has gone thrilling has a familiar tone to it. Remember Mercedes-Benz' "Electric Now Has A Mercedes?"

62 Photos
By: Steven Loveday
++
Got a tip for us? Email: tips@insideevs.com