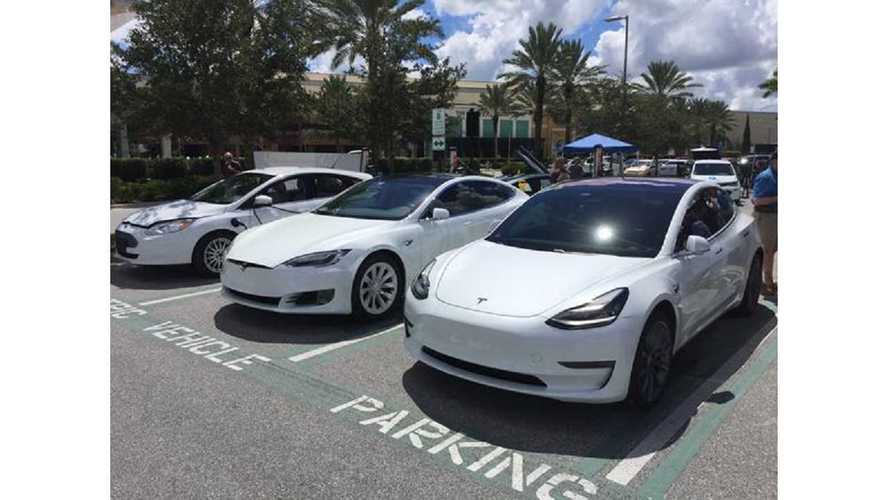 National Drive Electric Week (NDEW) runs from September 8th - 16th this year and serves as a nationwide celebration to heighten awareness around electric cars. There are over 300 events scheduled all across the US, Canada, and New Zealand. After speaking with EV owners all across the US — it's official, NDEW events are teeming with Teslas!

Above: A Tesla Model S and Model 3 make friends with some BMW i3s at the Chargepoint charging stations at Sarastoa's NDEW event (Image: EVANNEX)

Yearly NDEW events are presented by Plug In America, Sierra Club, and the Electric Auto Association. We've been intimately involved with NDEW events for about five years now — we even threw our own event a few years ago here in South Florida. Now, we send gift bags full of cool swag to NDEW events all over the country.

Above: My favorite license plate at the event "ELON WON" says it all (Image: EVANNEX)

This year, I personally decided to travel to Sarasota, FL to check out a local NDEW event at the University Town Center. Sarasota has such a vibrant EV community, they've even scheduled another event (a week later) at the Florida House Institute. Sarasota also happens to be the home of Larry Chanin, President of the Tesla Owners Florida, an official Tesla club which boasts over 600 members. And Zachary Shahan, director/editor of CleanTechnica and founder of EVObsession and SolarLove, is also based in Sarasota.

Above: Zach pulled up early in his BMW i3 with a "shout-out" to CleanTechnica right next to the charge port (Image: EVANNEX)

So I decided to make the trek across Alligator Alley stopping at the Fort Myers Supercharger along the way. I also juiced up right in Sarasota at an amazing Supercharger station (with 20 Supercharger stalls) right behind the local Whole Foods. When I attended the NDEW event, I was taken by the number of Teslas — especially the Model 3s — proudly showcased by new owners. I also had the pleasure of chatting up a Chevy Bolt owner who admitted his next car would also be a Model 3.

A big thank you to Zach and Larry for making me feel at home in Sarasota — and also kudos to Chris Sharek of Sharek Solutions who put on such a fun event. Chris had some local officials venture out to the event in order to present a special EV Proclamation along with commitments (on record) for more charging stations. Tesla also had an official display and was offering test drives.

Above: Another fun license plate "NOMO GAS" on a Tesla (Image: EVANNEX)

In any case, if you haven't been to a NDEW event yet, I highly recommend you check one out — here's the list of events. Be sure to check out the gallery below to see some of the cool electric cars showcased at the NDEW event this year in Sarasota...