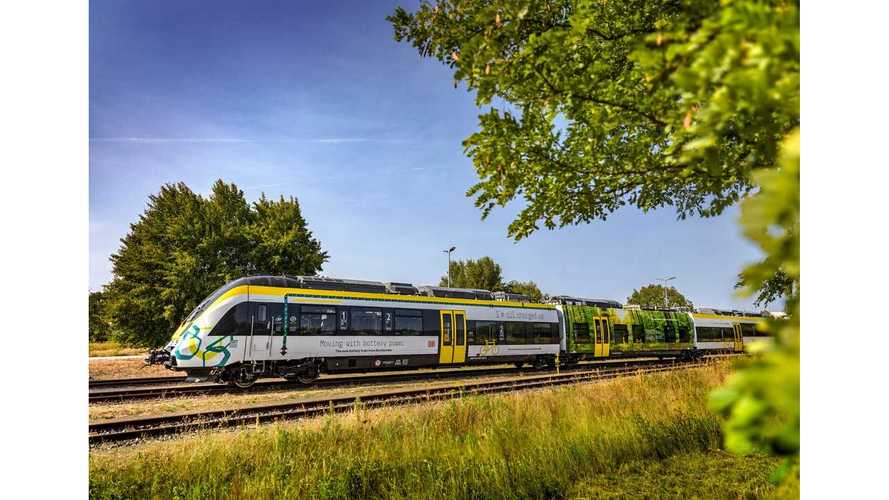 Progress in lithium-ion batteries enables some firms to think about making trains battery-electric instead of the typical series-hybrids.

Bombardier recently presented the Talent 3, which according to the press release, is the first of its kind to enter passenger operation in Europe in over 60 years.

The range is not as high as in case of electric cars, although trains can recharge the batteries from an overhead line while driving on many lines. In Germany, for example, around 40% of the rail network is not electrified, which means that a battery-electric train could operate partially off-grid and perhaps part on.

Another advantage is the regenerative braking capability, normally difficult to do when there is no on-board battery and electricity would need to be sent back to the grid.

The Technical University of Dresden says that a battery-operated train clearly has an edge with respect to the total costs across the service life of 30 years.

"Emission-free, energy-efficient and low-noise – the new battery-operated train from Bombardier Transportation, introduced to the public for the first time today, scores with these features. A group maiden voyage with the BOMBARDIER TALENT 3 electro-hybrid train was the highlight of the press event at Bombardier’s Hennigsdorf site. The guests included Enak Ferlemann, State Secretary at the Federal Ministry of Transport and Digital Infrastructure and Federal Commissioner for Rail Transport as well as the Brandenburg Transport Minister Kathrin Schneider.

“We want to continue to electrify rail transport. A train that can charge its batteries from the overhead line while driving is a huge step toward this and the epitome of innovation,” the State Secretary stated. “On non-electrified or only partially electrified routes, the motto is: move away from diesel on the tracks and toward cleaner and more environmentally-friendly mobility.”

“With our new battery-operated train, we are putting real innovation on the tracks,” says Michael Fohrer, Head of Bombardier Transportation in Germany. “This train is Bombardier’s technological response to challenges such as air pollution, climate change and scarcity of resources. Around 40 percent of the German rail network is not electrified. The Bombardier battery-operated train is an attractive option to counter that, both economically and ecologically speaking.”

In general, the prospects for the battery-operated train are positive. The range increases proportionally with the continuous capacity increases due to new battery developments. The current prototype is equipped with four BOMBARDIER MITRAC traction batteries and can travel routes of around 40 kilometres – in 2019, the next generation of battery-operated trains will be able to cover distances of up to 100 kilometres on non-electrified railways. In 2019, Deutsche Bahn (DB) will start a twelve-month trial run with passengers with the current prototype in the Alb-Lake Constance region.

The development of the battery-operated train is subsidised by the German federal government in the framework of an innovation program for electromobility with four million euros. The project partners include the DB Regio subsidiary DB ZugBus Regionalverkehr Alb-Bodensee (regional transport for the Lake Constance region), Nahverkehrsgesellschaft Baden-Württemberg (Baden-Wuerttemberg Regional Transport Company) and the Nationale Organisation Wasserstoff- und Brennstoffzellentechnologie (National Organisation for Hydrogen and Fuel Cell Technology) and the Technical University of Berlin."