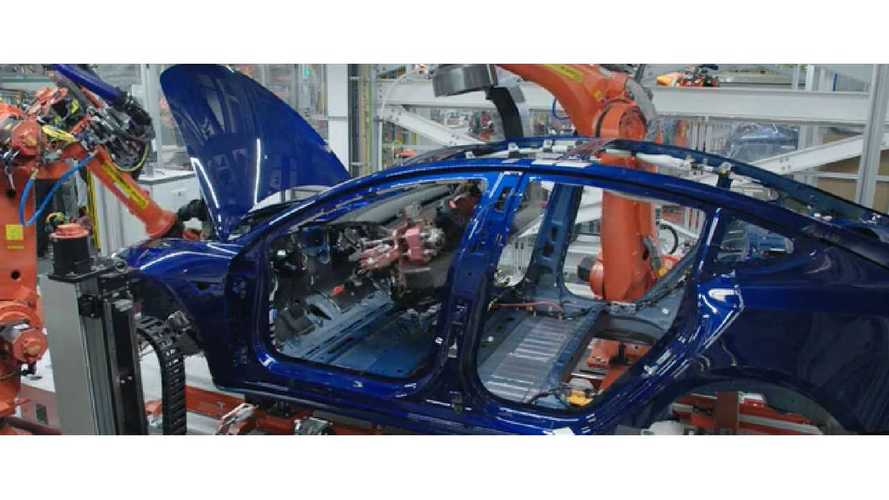 Not only that, the analyst believes Tesla will drop down to the coveted $100 per kWh battery cell cost point by the end of this year.

We've acquired a note to Tesla investors from Worm Capital (do your own stock research, please). It opens with this statement:

In late August, Tesla invited us to visit the Gigafactory located outside Reno, Nevada. We happily took them up on the offer. The visit included behind-the- scenes tours of each production wing—and concluded with test drives of the Performance Model 3 and Model S P100D, the fastest production car in the world.

The note provides some broad background for those not in the know, but then it moves on to specifics, like this:

After touring the facility, we feel highly confident in Tesla’s production process. Previous bottlenecks appear to have been remedied, and we’re increasingly optimistic in Tesla’s ability to hit— and sustain—weekly production rates of 6,000 Model 3 battery units per week, and with new Grohmann machine, scale to ~8,000 / week with minimal additional capital investment.

Then there's a lot of filler in the lengthy note, followed by the highlights, which we've included in entirety below:

● As of mid-2018, the Gigafactory is now the highest-volume battery plant in the world, according to Tesla. It currently produces batteries at about 200 million per quarter, closing in on a one-billion per year production rate. Tesla now produces more battery capacity than all other car manufacturers combined, including China, with a run rate of approximately 20 gigawatt-hours.

● Tesla will likely achieve a battery cell cost of $100 per kWh by the end of the year, so long as commodity prices remain stable.

● In the first ~45 days of offering Model 3 test-drives, the company reportedly received 60,000 sign-ups, according to Viecha.

● Grohmann Engineering will help module production become three times faster, and three times cheaper, according to Viecha. Their new system will be sent to the Gigafactory by the end of Q3 or beginning of Q4. The Grohmann machine will be in Zones 1, 2, 3, and Tesla will be receiving three machines. The process was designed to alleviate the previous bottleneck in module production which delayed Model 3 production significantly. The machine is already built, and points to the advantage Tesla will have in building future Gigafactories. They have learned many painful lessons, but have a solid blueprint for porting the factory across the world.

● Tesla will likely start producing the shorter-range Model 3 in the next eight months. Right now, they are focused on selling higher-margin cars where demand continues to exceed what is being produced.

● We believe Tesla is creating a best-in-class self-driving technology. According to Tesla, the company believes it can gather 1 billion miles of data per year from current drivers.

● According to Tesla, by next year they will start exporting Model 3s to other countries. They will also begin to earnestly produce Semis by 2020.

So, key takeaways are Tesla Model 3 production should jump to 8,000 per week in the near future and battery costs should drop to near $100 per kWh by the end of the year.