Motor Trend has just spent some quality time with the Tesla Model 3 Dual Motor Performance and published some eyebrow-raising instrumented numbers. This is the publication's second time around with the Performance version of the mid-size all-electric sedan and probably not their last - the example they worked over this time lacked the still-in-development "track mode." The first review was a narrative-driven piece produced after a relatively short time behind the wheel. This time around, it's all about the numbers.

Check Out This Tesla Model 3 Performance Review By Unbox Therapy 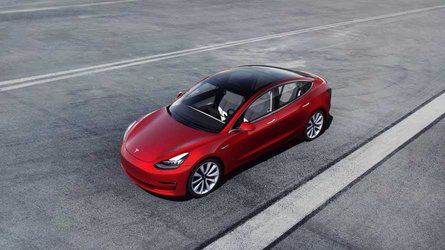 As one would expect, during their time with the Model 3, MT staff put it through its acceleration, braking, and skidpad paces. They then compared those to some of its competitors and painted a flattering Performance portrait. Take the 0-to-60 time, which the buff mag marked as a mere 3.28 seconds. They note that, while it can't keep pace with quickest Tesla Model S (2.28 seconds!), it does keep some pretty stellar company, naming the Audi 2014 R8 V10 Plus, the 2018 BMW M5, and the 2018 Mercedes-Benz E63S, among others, as equals when it comes to this metric.

Of course, the ability to scrub speed is at least as important as adding it quickly, and here the red-painted Brembos do yeoman's work, halting — without the need for an over-the-air update — the M3P in as little as 99 feet, a result achieved during the last of three attempts (the others were 100 and 105 feet). At MT notes, this speaks highly of the car's ability to dissipate heat.

The car's handling was more of a mixed bag. Certainly, it seems they appreciated the quickness and precision of the Model 3's steering. However, it only averaged .94 g on the skidpad, where its weight and tires may have worked against it. MT also conducts a figure-eight test. Here, while suggesting it might see some improvement with the addition of track mode, the car scored a 24.3 second time, which still puts it in pretty decent company on the publication's all-time list.

With its performance numbers put into perspective like this, it's fair to say the California automaker has done a good job of offering a bullet of a sedan that can stand up to it high-caliber competitors, and even embarrass them at times. Importantly, while not burning gasoline. Nicely done.