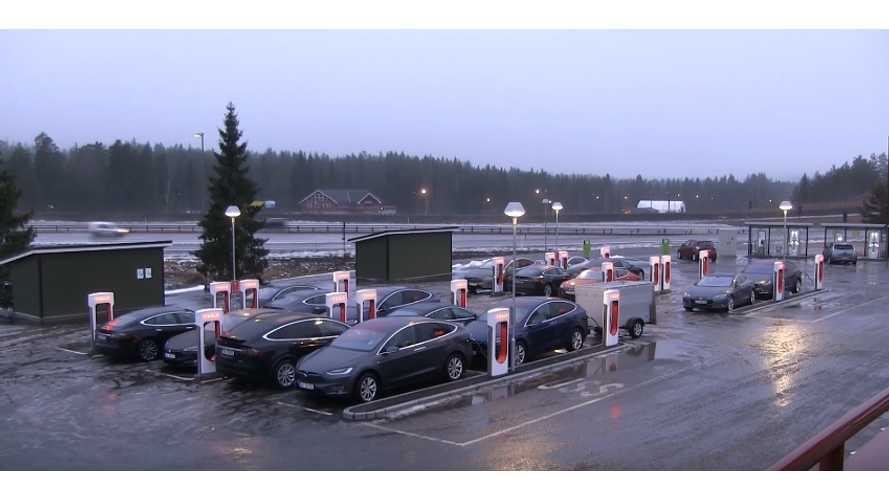 Electric cars are running rampant in Norway. Even pricey options from American automaker Tesla are becoming commonplace on the streets of Oslo. Why? According to a report from CNBC, Norway is "the country where a luxury Tesla has become the budget option."

Above: A Model S on display at Oslo's Tesla store (Flickr: Norsk Elbilforening)

CNBC's David Reid points to an example from "Marte Skogstad Allgot moved back to Oslo, Norway, from London two years ago and soon found that running a car on gas was prohibitively expensive. To her surprise, Allgot discovered it was cheaper to run a fully-electric Tesla Model S car than it was to drive a hybrid Toyota Prius."

"When we added up how much we were spending on tolls and fuel it was the equivalent of buying a Model S," she told CNBC. "I still can't believe that buying what I consider to be an expensive, luxury car makes more economic sense than owning a Prius."

Above: A look at why the streets of Oslo are teeming with Teslas (Youtube: Vox); Editor's Note: Tesla's Model S P100DL 0-60 MPH acceleration was recently clocked in at 2.28 seconds.

All-electric vehicles don't have to pay tolls stationed at city boundaries in Norway. Allgot says the savings can add up. "The toll system is electronic so you don't notice the 54 Norwegian crowns ($7) every time, but when you see that bill at the end of the month you have to ask whether it is worth it," she said.

Allgot's solution was to buy a Tesla. And she's not alone. According to the European Alternative Fuels Observatory (EAFO), Tesla's premium sedan, the Model S, and, its luxury SUV, the Model X, combine to make up 27.9% of Norway's battery electric vehicle sales in the past 12 months.

Above: A look at the top 5 bestselling electric vehicle models in Norway over the past 12 months sorted by BEV options (Source: EAFO)

Norway's EV policy is described (via Norsk evilforening) as "a substantial package of incentives developed to promote zero-emission cars." Substantial indeed. Norway's EV policies have helped to grow the country's market share for battery electric vehicles (BEVs) to 20.8% and 18.4% for plug-in hybrids (PHEVs) — combining for a total of 39.2% for 2017.

So what are some of Norway's policy incentives that have contributed to all this explosive growth in the EV sector? Norsk evilforening provides a comprehensive list (including recent updates) of Norway's EV policies, see below.

Above: An overview and chronology of Norway's EV policy incentives (Source: Norsk evilforening)

In addition, "the Norwegian Parliament has decided on a goal that all new cars sold by 2025 should be zero emission vehicles." Furthermore, "The overall signal from the majority of political parties is that it should always be economically beneficial to choose zero and low emission cars over high emission cars."

Such support from the government spans nearly three decades in Norway. For a look back at some key milestones over the years, check out the infographic below.