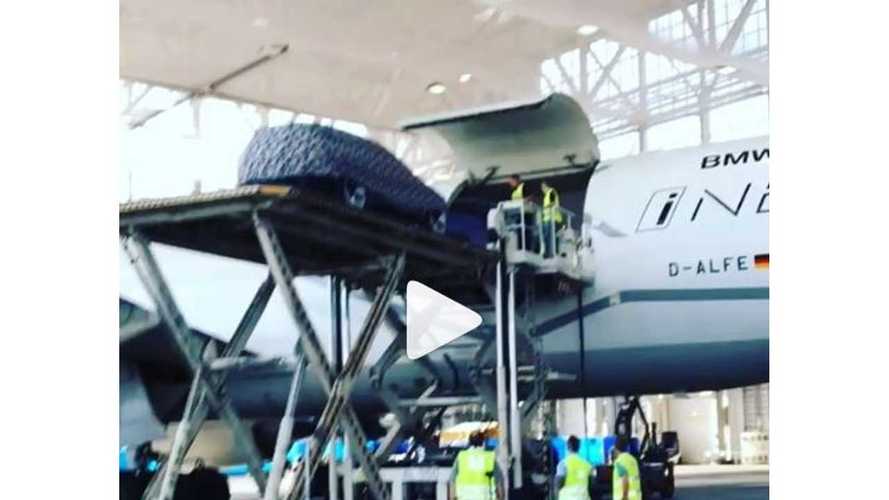 Our first-ever look at the real BMW Vision iNext out in the wild before it boards an airplane for its in-flight reveal.

Courtesy of our friend at BMWBLOG, we catch a video glimpse of a covered Vision iNext before it goes aboard the airplane for a never-done-before type of in-air debut. The BMW-focused site states:

We spotted the BMW iNEXT while being loaded for its world tour. Munich, New York, San Francisco and Beijing. Stay tuned for more exclusive coverage!

BMW Vision iNext To Be Shown Off Inside A Boeing Airplane

Check out the BMW Vision iNext below:

Starting today, BMW will present the Vision iNext in four cities during a ’round-the-world flight.

No concrete details are known in connection with the iNext at this time, but our best guess says, the iNext — if it continues to carry that moniker — will be crossover-shaped and boast a range of 435 miles. It will carry what BMW refers to as the automaker's fifth-generation electric powertrain.

You can check out some BMW's most recent Vision iNext teaser video below:

Meet the face of the future, the #BMW #VisioniNEXT. Embodying our vision for #emobility through emotive design and innovative engineering and application of modern technologies.#MyFavoriteSpace #bmwi #bmwgroup @bmwi @bmw pic.twitter.com/BPc3eZzRV3