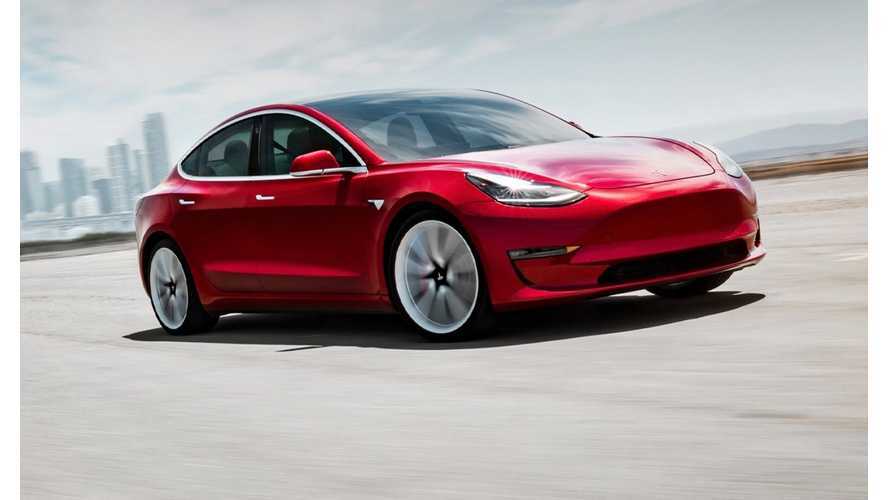 The Model 3 is going to top the U.S. plug-in sales charts for 2018. But if production continues at this pace, the popular EV could also close in on the top 5 for ALL sedan sales in late Q3 and Q4.

The Model 3 tends to be compared to its perceived competitors in the luxury sedan market or the plug-in market. But that's thinking too small. Moving forward, the Model 3 will be leaving EV and luxury competitors behind. Now, the car stands a very good chance to place near the top of all sedans for the second half of the year.

More About the Model 3

Tesla announced they finally met their 5,000/week production goal in the last week of June. This came just weeks after an employee let slip that the Gigafactory had accomplished the same feat. Coming off of this even bigger than usual end of quarter push, production stopped briefly in early July. Now the factory is rolling again and production should average well over 4,000 for the remainder of the year.

So The Street decided to throw out some estimates to see where this would place the Model 3 in the grand scheme of sedan sales. Due to a slow start in Q1, hitting the top-10 for all of 2018 would be difficult. However, the Model 3 could very easily end up in the top-5 for the 2nd half of the year. The Street found that if the Model 3 is able to average 5,000/week production for the next 2 quarters, that will put them on a path towards about ~130,000 units between July and December. If Tesla is able to increase average production to 6,000/week, they could top 156,000 units for 2H. These numbers take into account the roughly 11,000 in transit at the end of Q2.

Electric vehicles are on the verge of mainstream adoption.

While these numbers are still speculative, they're also reasonable. We cannot say how well other sedans will perform for the rest of the year, although few competing models are up over 2017. Tesla will need to maintain a high level of production with less scheduled shutdowns. In addition, the number of U.S. buyers waiting on the short range Model 3 could also impact sales this year since it is not expected to launch for another 6-9 months. But with the U.S. EV tax credit dropping to 50% for Tesla in January, demand for the long range model should surge over the next few months.

Even if the automaker averages only 4,000/week production for the rest of the year, the Model 3 could still exit the 2nd half in the top-10 of sedan sales. This is all the more impressive when you consider that currently available Model 3 trims cost $20k to $40k more than other chart topping models.

Tesla certainly has not been the only automotive brand to push us closer to complete electrification of the automobile. But no currently availabile model has the potential to truly hit the mainstream like the Model 3. Seeing Tesla top long-established nameplates like the Malibu, Altima, Sonata, Cruze and Sentra this year would really make a statement on behalf of all electric vehicle owners.

Gallery: Tesla Model 3 Could Soon Charge Into The Top 5 Of Sedan Sales