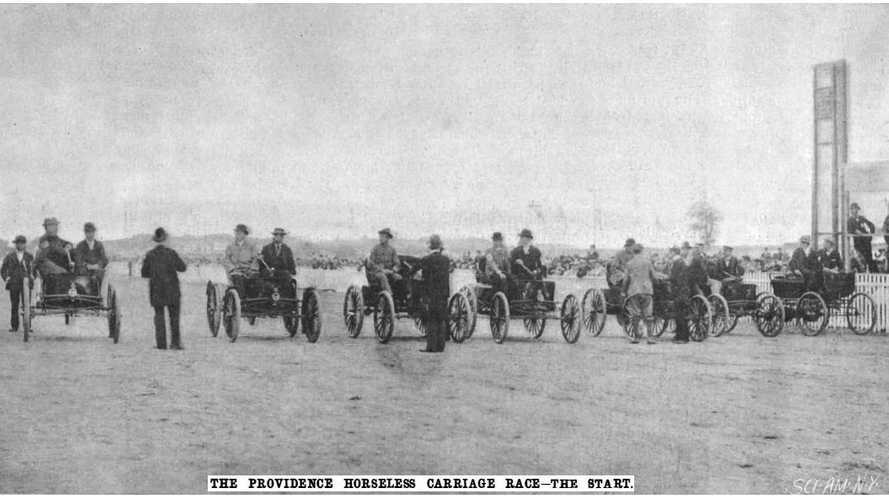 *First race on a track

Electric vehicles are upsetting the racing apple cart, winning some pretty historic races. Perhaps the most significant was this year's evisceration of the Pikes Peak record by Romain Dumas in the Volkswagen I.D. R. But fans (and historians) know that races were being won under the influence of battery power a long ways back. In fact, the first auto race held in the U.S. on a track, as opposed to cross-country events, was won by an electric car on this very day back in 1896.

188-Year-Old History Of Electric Cars In One GIF

Yup, before the 20th century cracked open, a race was held to promote automobiles and it was a pretty big deal. Over 60,000 people showed up at the Narragansett Trotting Park –  a horse racing track a mile in length – located in Cranston, Rhode Island on the outskirts of Providence, to watch two electric horseless carriages challenge five gasoline-powered ones.

According to History.com, the start was a slow one, with the crowds yelling the then-popular refrain, "Get a horse!" Before long, though, the entry by The Riker Electric Vehicle Company (Andrew L. Riker, proprietor) was ahead. At the end of five laps, the fastest of which it covered in 2 minutes, 13 seconds, the Riker machine was the first to cross the finish line with a total time in the neighborhood of 15 minutes. The other EV, from the Electric Carriage and Wagon Company, trundled into second place followed by a petroleum-powered machine from the Duryea Motor Wagon Company: an outfit responsible for the very first automobile sales in the United States.

The event was great for Riker –  he won $900 (about $27,000 in today's money) –  and for automobile race tracks, which immediately began springing up in cities around the country. As we know, though, the electric vehicle's success of that era was short lived, ending for decades after, ironically, Cadillac introduced the first electric starter on a production automobile in 1912.