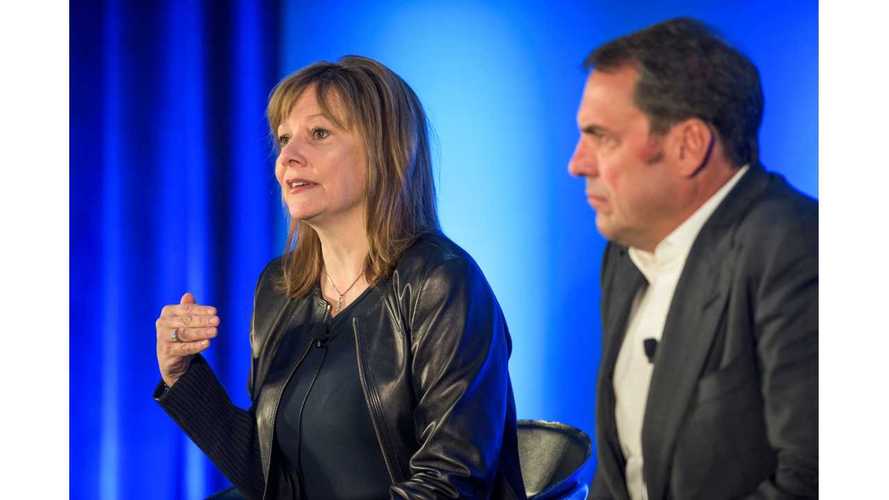 However, there is still a long way to go to meet the lofty goal of 'zero crashes, zero emissions and zero congestion'

This week, General Motors' CEO Mary Barra published a blog post on LinkedIn to address the company's all electric future. Last October, Barra made the announcement that 20 new all-electric vehicles would be released globally by 2023.

The Chevy Bolt EV has been in high demand globally and will see a production increase of 20% next quarter above the average production rate for the first 3 quarters. The 2019 Chevy Volt has also managed to stay relevant despite a significant increase in PHEV competition. On the other hand, the Cadillac CT6 PHEV has yet to gain a foothold.

In her LinkedIn blog post, Barra confirmed what was already widely expected. LG Electronics' new facility in Hazel Park, Michigan will be supplying battery packs for the Chevrolet Bolt EV.

The GM battery lab at the Global Technical Center in Warren Michigan will also be receiving "major enhancements" this fall including "new test chambers and advanced equipment to accelerate our next-generation battery architecture". Automotive News reports that the facility will receive $28 million for the new upgrades this year.

The CEO also confirmed that the automaker will deliver a prototype vehicle capable of 180-miles of range in less than 10 minutes of charging.

Unsurprisingly, China is getting the bulk of the electric vehicle attention

Outside of the U.S., the diminutive Baojun E100 has been a surprise hit in China. Baojun is also launching a follow up to the little 2 seat-er this month. Creatively named the Baojun E200, the new model will have sleeker styling and longer range than the E100 sibling.  The Velite 6 PHEV will also be launching in China, although reports have indicated battery supplier issues might delay the launch.

These vehicles join the Baojun E100, Buick Velite 5 and Cadillac CT6 PHEV that are already on sale in the market. This focus on China was expected considering the country has rolled out stronger New Energy Vehicle requirements. Barra states "China is the world’s largest EV market and will be a large driver of global EV adoption."

As far as the United States, there have been no new electric vehicle announcements recently. Certainly the increase in Bolt EV production is a positive development. But much of this increase will actually go to meet the demand of other markets.

Still GM has embraced plug-ins in the U.S. more than any other traditional automaker. So we are excited for whatever their next move is. What we are waiting for is an announcement of the rumored Buick CUV that is based on the Chevy Bolt. We certainly hope General Motors has some news to share with us soon on this front.