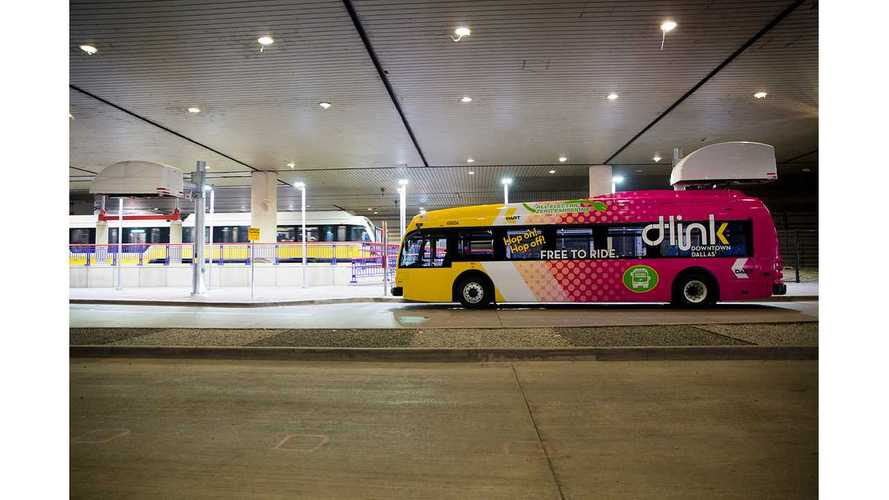 The Dallas Area Rapid Transit (DART) agency is certainly no stranger to electric public transit. The region comprised of over a dozen cities already has over 95 miles of light rail and streetcar service. The Dallas Streetcar connecting downtown and Oak Cliff is also fairly unique in that it runs on battery power for a portion of its route across the Houston Street Viaduct. However, while the rail systems have long been driven by electricity, city buses had yet to make the leap. That changed this past week as the first batch of Proterra buses began to operate downtown.

Part of Dallas' D-Link, the buses primarily service office workers and tourists staying in and around downtown. The D-Link buses are free to ride, stopping at major city landmarks and serving as a connector for the 2 streetcar lines. After 19-miles of service, the Proterra buses arrive at the convention center station and receive a full charge in about 5 minutes.

"In a lot of ways, these are mobile labs." Morgan Lyons of DART told the Dallas Morning News. "We want to understand how they perform. What's involved in maintaining them. Should be cheaper. On the front end the buses are more expensive, but on the back end we think the maintenance should be cheaper."

Each bus cost over $970,000, higher than the $480,000 of a compressed natural gas bus. However, city officials expect that over time, the costs of the vehicles will even out. The agency expects to save as much as $400,000 in fuel alone over the next 12 years. Maintenance costs are expected to be far lower as well.

Ryan Popple of Proterra believes the buses are not only greener but cooler. "The environmental aspect of it is important, but it's also about making mass transit cutting edge and cool and state of the art so that we get more people out of cars and into buses." he stated. This is likely an important effort for city leaders. While the light rail system has great support in the city and its suburbs, the buses are underutilized.

The program was partially funded by a $7.6 million grant from the Federal Transit Administration for the deployment of low or zero emission vehicles. As prices drop on electric buses, the economic benefits will be even greater. If the pilot program is successful, DART would like to expand the fleet in the future.