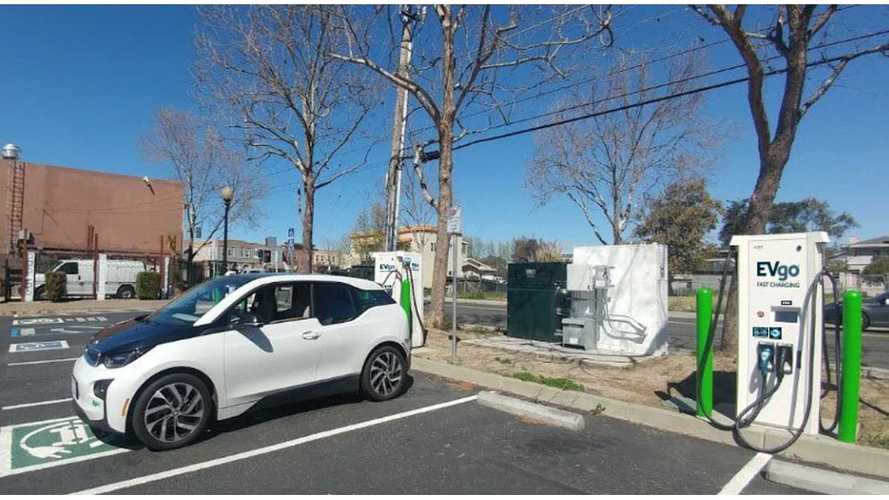 The site combines two 50 kW fast chargers and an energy storage system that in a single housing integrates two BMW i3 battery packs (22 kWh each). Using a 30 kW inverter (provided by Princeton Power Systems), the ESS turns into 30 kW/44 kWh system that is charged from the grid during peak solar electricity production for later use when peak fast-charging demand occurs. The software controls were developed by Kisensum.

Batteries are recycled from the i3, which makes us wonder about their capacity loss and origin, as the i3 packs were considered as very durable with minimal capacity loss.

"Following a pilot program at University of California San Diego (UCSD), this second-life battery system has been unveiled at an operational EVgo fast charging station located in Union City, CA at 3960 Smith Street.

EVgo has integrated second-life BMW i3 batteries to store energy from the grid generated during peak solar hours and later use that stored energy to fast-charge EVgo customers during periods of high demand. In addition to reducing curtailment of solar or wind power, a benefit to all grid users, EVgo is also commercially demonstrating the reuse of EV batteries for grid benefit."

EVgo conducted a successful test case at the UCSD microgrid prior to launching the second-life battery system in Union City. This test case and the Union City implementation are part of the first of three technology demonstration projects that EVgo is currently engaged in with support from the California Public Utilities Commission: 1) energy storage to support electric vehicle fast charging; 2) a vehicle-to-grid (V2G) technology project; and 3) high power electric vehicle charging (50kW+).

The Union City project was a success thanks to the many partners involved in the project. BMW provided the recycled energy storage packs from BMW i3s and continues to provide ongoing technical support. Princeton Power Systems provided inverter hardware and integrated the inverter with the battery packs into a productized system. Kisensum developed software controls for the battery system and managed software integration for the overall site level demand charge management. EVgo plans to deploy additional energy storage resources at stations across the network and sees energy storage as a key technology to enable affordable DC fast charging."

“EVgo is pushing energy storage innovations forward in the EV space, as we deliver solutions for our customers that are good for the environment and the economics of fast charging. Our Union City station is just the start of EVgo’s work integrating advanced energy storage into our rapidly expanding fast charging network across the USA.”

“The increased use of second-life battery technology is an exciting development, keeping fast charging of clean electric vehicles affordable and insulating the grid from spikes in electricity demand. Reusing batteries as backup for charging is a win-win for the economics and the environmental benefits of EVs.”