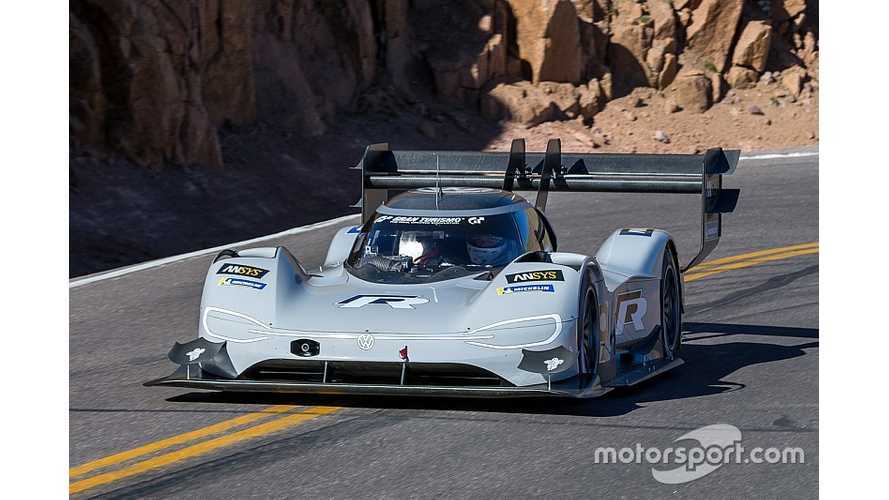 The all-time hill climb record might also be within reach.

There’s another hill Volkswagen intends to climb, and just like it did at Pikes Peak a few weeks back with its electric I.D. R, the automaker is looking to set a record. This time the hill in question is a bit less ambitious – just over a mile in length compared to 12.4 miles – but it’s still one of the most famous hill climbs in the world.

We’re talking of course about the Goodwood Festival of Speed which kicks off this week and yes, VW will be there with the I.D. R seeking a new electric-car record. The current time-to-beat is 47.34 seconds, set back in 2013 by Jonny Cocker in an LMP-based electric car called the Lola-Drayson B12 69/EV. That car packed four electric motors generating over 850 combined horsepower, and it was held to the ground with all kinds of active aero components to make the most of Goodwood’s short-but-sweet course.

By comparison, the I.D. R uses a pair of motors to make 680 combined horsepower, but at just 1,100 kilograms (2,425 pounds) the VW racer can blitz to 100 km/h (62 mph) in approximately 2.2 seconds. That’s quicker than an F1 car, not to mention a few tenths ahead of the current record-holding Lola. But tackling Goodwood is about more than just intense acceleration; it will be interesting to see if the I.D. R’s aero package – which was built to handle the higher altitudes and higher speeds at Pikes Peak – will match up to the Lola-Drayson’s active aero.

Curiously enough, VW doesn’t make any specific mention in its Goodwood press release about possibly capturing the hill climb’s all-time record. However, company was quite keen to mention the details of that record, which stands at 41.6 seconds and was set by former Formula 1 driver Nick Heidfeld behind the wheel of a McLaren-Mercedes F1 car back in 1999. Could this be VW’s wink to the world that an all-time Goodwood record could also be in its sights?

The same sort of posturing took place a few weeks back at Pikes Peak, and we all know what happened then. We’ll be watching Goodwood this week and should the record (or records) fall, we will let you know.