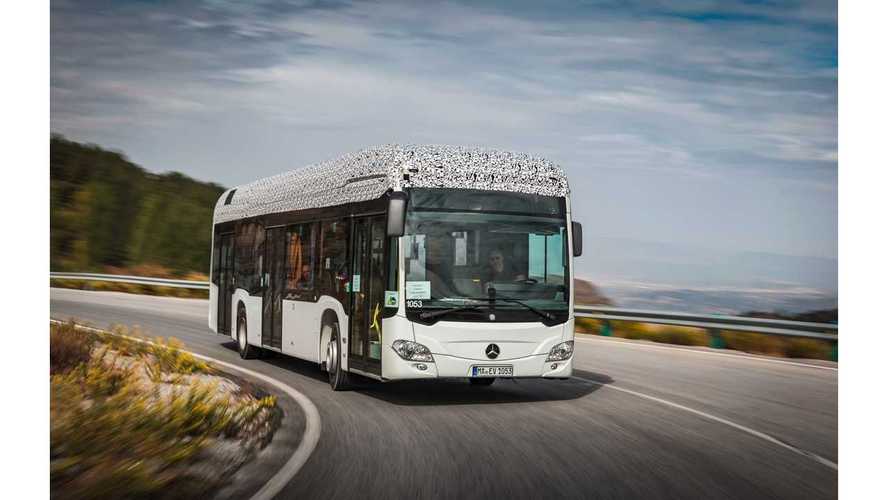 With its debut just days away, the all-electric Mercedes-Benz Citaro bus is one of the most impactful reveals we'll have all year. For most European and Asian cities, the Citaro has been the workhorse of the urban city transport. With years of evolution put into its every generation, the Citaro is popular with both drivers and passengers.

Now, a fully electric version of this highly-popular city move will come with a full complement of batteries can achieve an operating range of around 150 kilometers (93 miles) during the summer. To translate into real-world numbers, this allows the electric Citaro to serve some sub-networks within the daily coverage of a city bus without opportunity charging. Add the occasional opportunity charging at the line endpoints, and the emission-free urban transport may be just behind the door.

Cities will value the specs of the all-electric Citaro. The 12-meter long vehicle - which will celebrate its world premiere in September at the IAA Commercial Vehicles show - is slated to come with an electric portal axle with electric motors at the wheel hubs. The motors come with a peak output of 2 x 125 kW and 2 x 485 Nm (357lb-ft) of torque. This goes in line with similar specifications provided by current, diesel-powered Merce-Benz Citaros currently running in cities across the world.

Power is provided with lithium-ion batteries with a total capacity of up to about 243 kWh. The batteries are split between up to a maximum of ten modules, with two modules located on the roof and four modules in the rear of the bus. Additionally, customers can order a configuration that adds a  further two or four battery modules on the roof of the vehicle.

The all-electric Citaro is charged VIA a standard Combo 2 connector. For customers that have such a line configuration that allows it, a roof pantograph can be added for opportunity charging. This could come in handy for lines that have either a short turnaround or for longer lines, which are configured with a longer wait time between driving cycles. Additional opportunity charge points could be installed on bus lanes in front of heavy intersections, where the buses could utilize the 2-3 minute wait times to bring some more juice on board and extend its range.

Rhein Neckar Verkehr GmbH will be the first customer for the fully-electric city bus from Mercedes-Benz. The first units are set to arrive at the company's yard in late 2018. with practical operation in the Rhein-Neckar metropolitan region as part of customer trials following suit.

"Our bestselling Mercedes Benz Citaro is built in the EvoBus plant in Mannheim, our Centre of Competence for city buses. Natur,ally this also applies to the electric version, which we are currently preparing for series production. I am therefore pleased that our first customer for the fully electric city bus also comes from the Rhein Neckar metropolitan region, In the very proximity to our location, the cooperation with Rhein Neckar Verkehr GmbH enables us to gather important findings about the daily operation of our fully electric Citaro and for the urban public transport of the future," says Hartmut Schick, Head of Daimler Buses.

The locally emission-free and almost silent through the city Mercedes-Benz Citaro is set for a World Premiere on July 10th.