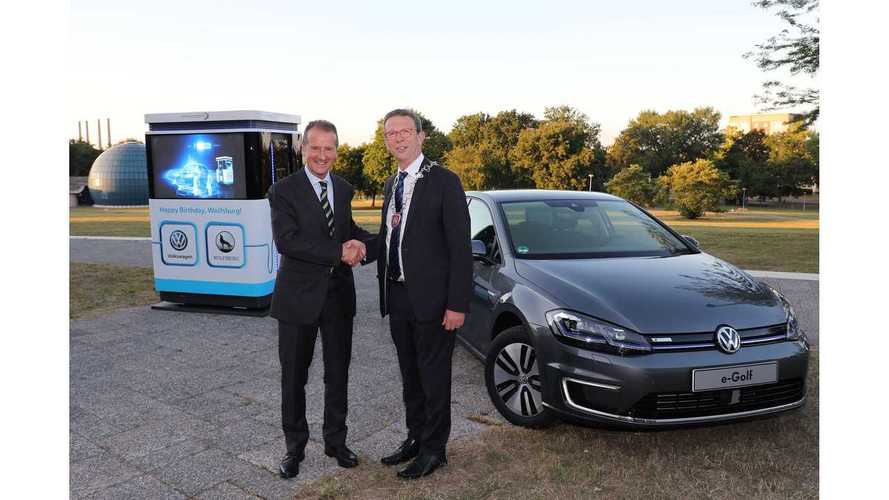 On the occasion of the  80th anniversary of Wolfsburg, Volkswagen handed an electrifying gift to the city of Wolfsburg - 12 special mobile charging stations.

The city of Wolfsburg is the site of the Group’s headquarters and huge production facility, which explains the generosity of Volkswagen.

The city would like to expand its charging infrastructure in the near future, spending €10 million.

The 12 mobile charging stations, donated by Volkswagen, are ready to supply up to four vehicles simultaneous (cars using CCS Combo and AC Type 2) or electric bikes using household sockets. The chargers look quite big and heavy - that's because of the 200 kWh battery inside. Stations to be deployed by trucks where needed (for example at sport events).

The chargers initially will be available for free when will enter service in March of next year.

"The mobile charging stations were developed by Volkswagen’s Components Division. They will serve as an ideal bridging technology that can support the ramp-up of electromobility. The fast-charging stations work independently of the power grid and can be set up flexibly to meet particular needs. They employ the principle of a powerbank for e-vehicles.

A working group for charging infrastructure set up by the city of Wolfsburg and Volkswagen under the umbrella of #WolfsburgDigital is currently putting the final touches on a complete concept and a milestone plan that will show when and where the fast-charging infrastructure will be set up in the city. The specific and visible steps are scheduled to start in 2019.

The city of Wolfsburg and Volkswagen are working jointly to turn Wolfsburg into a “smart city” and a role model for other cities.

Facts about the mobile charging stations (part of the overall gift)

“Wolfsburg and the people who live here need a successful Volkswagen. This means one thing: We have to become more productive, open and faster. In return, Volkswagen needs to have a livable, progressive Wolfsburg, a city that is willing to change.”

“The future of Volkswagen and Wolfsburg lies in the development smart forms of mobility. As the location of the company’s headquarters, Wolfsburg serves as a laboratory where VW’s new products undergo their first real-world test. The e-charging stations represent another important step in work to create a high-performance network of charging locations. This is what we need to encourage people to switch to electric vehicles. E-mobility will improve the quality of air in our cities and will make them quieter.”