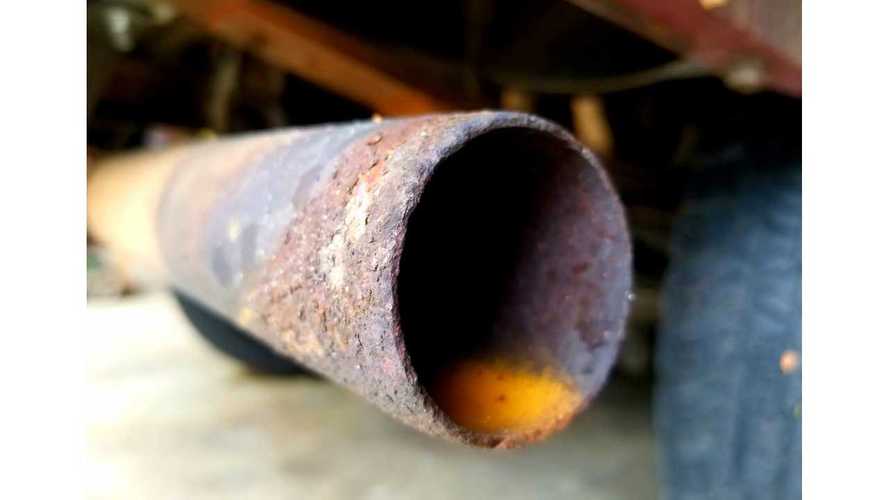 Days after the November 2016 election, automakers began lobbying the new US administration to water down existing fuel economy and emissions standards. This requires a lengthy and complicated legal process, so it wasn’t until August that the White House released a proposal that would freeze rules requiring automakers to build cleaner, more fuel-efficient cars, and that would also challenge the right of states to set their own, more stringent pollution standards.

Above: By rolling back emission standards, the Trump administration may be delaying the advent of electric vehicles in the U.S. (Image: Charged)

The new proposal, jointly published by the EPA and the Transportation Department, would revoke the existing federal standard, which will require automakers to increase average fuel economy to about 54 mpg by 2025. The new rules would freeze fuel economy after 2021 at about 37 miles per gallon. They would also revoke a legal waiver, granted to California under the 1970 Clean Air Act and now followed by 13 other states, that allows those states to set more stringent tailpipe pollution standards than the federal ones.

Automakers have devoted much money and effort to weakening or delaying the fuel economy standards, and now they have a sympathetic ear in Washington. Indeed, their lobbying efforts may have succeeded a little too well. As the New York Times reports, the proposal seeks to revoke states’ rights to set their own pollution standards, which is likely to lead to a lengthy legal battle with California and the other states that follow its rules, leaving carmakers caught in a regulatory no man's land.

California Attorney General Xavier Becerra left no doubt about his determination to resist the rollback: “The Trump administration has launched a brazen and unlawful attack on our nation’s clean car standards. We will use every legal tool at our disposal to fight back.” California Governor Jerry Brown called the proposal “reckless” and a “betrayal,” and promised, “California will fight this stupidity in every conceivable way possible.”

The other clean-air states, including New York, Virginia and North Carolina, soon joined the chorus. “The administration’s proposal to weaken these rules will cause the American people to breathe dirtier air and pay higher prices at the pump,” said a joint statement from the Attorneys General of the 13 states (as reported by The Guardian). “We are prepared to go to court to put the brakes on this reckless and illegal plan.”

Automakers still hope that the administration will make some sort of deal with California before issuing a final proposal. “With today’s release of the administration’s proposals, it’s time for substantive negotiations to begin,” said Gloria Bergquist, a spokeswoman for the Alliance of Automobile Manufacturers. “We urge California and the federal government to find a common-sense solution that sets continued increases in vehicle efficiency standards while also meeting the needs of America’s drivers.”

Acting EPA Administrator Andrew Wheeler also said he would like to avoid a legal showdown. “It’s my goal to come up with a 50-state solution that does not necessitate pre-empting California,” he told a Senate panel. However, the White House and the Transportation Department are said to be spoiling for a fight with California, according to the Times.

The administration will now invite public comment on the proposal before issuing a final version, probably later this year.  The list of dissenters includes automotive suppliers, auto dealerships, and of course environmental groups, who hope that public pressure will convince the government to make substantial changes to the plan.

The administration justified the rollback of standards by claiming that higher fuel economy would lead to higher costs and more highway fatalities, claims that the National Resource Defense Council, among others, refuted. “The administration is using a parade of horrors to justify an extreme rollback,” said the NRDC’s Daniel Becker. “This will lead to more polluting vehicles, cost consumers more, and it won’t save any lives.”

Above: Tailpipe emissions are a deadly source of greenhouse gas emissions and harmful pollutants (Image: Living on Earth via Pittou2, Flickr CC BY-NC 2.0)

“The proposal attempts to counter years of robust technical analysis that culminated in the joint analysis that EPA, NHTSA, and CARB produced in 2016 and the Obama administration’s 2017 determination that the existing standards are not only achievable at considerable savings to consumers, but could be strengthened,” reads a technical report from the NRDC. The NRDC says that the administration's arguments rely on dubious data, as its report explains in detail.